The Young and the Restless Spoilers: Thursday, May 9 – Abby Uncovers a Secret – Mariah Rushes to Tessa’s Defense – Phyllis Causes Chaos

BY Heather Hughes on May 8, 2019 | Comments: one comment
Related : Soap Opera, Spoiler, Television, The Young and the Restless 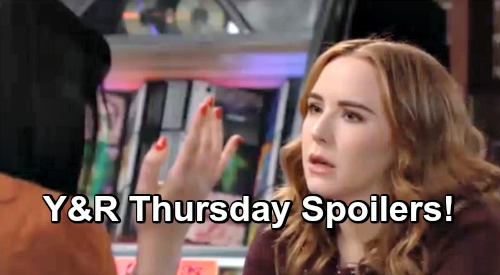 The Young and the Restless (Y&R) spoilers for Thursday, May 9, tease that Abby Newman (Melissa Ordway) will learn something surprising. She’ll find out a secret, so what’s this about? There are a couple of options to consider here. Nick Newman (Joshua Morrow) knows Adam Newman (Mark Grossman) is alive, so it’s possible he’ll fill his sister in on their brother’s survival.

However, Abby is usually the last to know when it comes to Newman family secrets. Perhaps it’s because she’s also an Abbott. Regardless, Abby really is treated like a second-class Newman most of the time. If Abby’s left out of the Adam mayhem for now, there’s still another big secret left for her to uncover.

Mia Rosales (Noemi Gonzalez) went after Abby following their Valentine’s Day confrontation. She ended up attacking Lola Rosales (Sasha Calle) by mistake, which nearly cost Lola her life. That secret’s just waiting to come out. It’s possible Abby will overhear something shouldn’t or stumble across a clue that helps her put it all together.

The Young and the Restless spoilers say Mia will be arrested before the week’s over. Whether it’s real or a fantasy remains to be seen, but it could certainly be real if Abby finds proof of the truth. If she takes evidence to Paul or at least offers accusations that lead him to evidence, this could set up Mia’s shocking arrest on Friday.

Meanwhile, Jack Abbott (Peter Bergman) and Lauren Baldwin (Tracey E. Bregman) will do some clashing at the office. Since Phyllis Summers (Gina Tognoni) recently hacked their servers, Lauren and Jack might argue about the results of that. It doesn’t look like they’ll suspect Phyllis yet, so they may play the blame game in Thursday’s new Y&R episode, May 9.

The good news is Jack and Lauren won’t be at odds for long. The bad news is they may end up getting too close for comfort soon. That’s not what most Y&R fans want for Michael Baldwin (Christian LeBlanc)! He deserves Lauren’s loyalty, so let’s hope she can give him that despite the looming temptation.

Other Young and the Restless spoilers say Mariah Copeland (Camryn Grimes) will rush to Tessa Porter’s (Cait Fairbanks) defense. Tessa and Ana Hamilton (Loren Lott) worked through their recording studio difficulties and created a great song together. They both feel like things are going to be a breeze from now on, but they’re wrong about that. There’s going to be tension even into the month of June.

With that in mind, it’s possible domineering Ana will cause issues again on Thursday. She may berate Tessa and prompt Mariah to stick up for her. Then again, Mariah could rush to Tessa’s defense in a more literal sense. After all, there’s a stalker on the loose. They probably won’t be cornering the real culprit just yet, but Tessa could still find herself in a risky situation.