The Young and the Restless Spoilers: Wednesday, May 8 Recap – Tessa’s Risky Stalker Tactic – Sharon Haunted by Past, Fights Adam’s Pull

BY Heather Hughes on May 7, 2019 | Comments: one comment
Related : Soap Opera, Spoiler, Television, The Young and the Restless 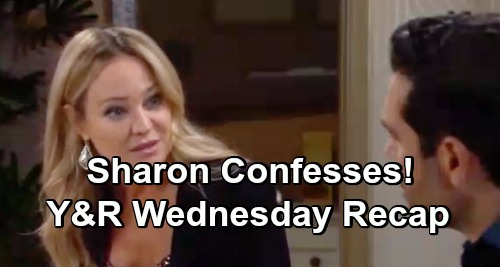 The Young and the Restless (Y&R) spoilers and recap for Wednesday, May 8, tease that Sharon Newman (Sharon) will wait for Adam Newman’s (Mark Grossman) arrival in the park. When he doesn’t appear, Sharon will text him that she’s there. She’ll hear Adam’s phone ding with the notification, but he’ll take off by the time she approaches the bushes.

Back in the hotel room, Sharon will tell Rey Rosales (Jordi Vilasuso) how she felt Adam’s presence. She’ll open up about their deep connection and how Adam saved her life. Sharon will recall that after she burned down the Newman ranch, Adam came to her rescue. He even got her into therapy, which led to her bi-polar diagnosis.

Y&R spoilers say Rey will respond with compassion after Sharon admits her struggles. He’ll hug Sharon before they address Nick Newman’s (Joshua Morrow) fears. Sharon won’t plan to let Adam get in her head. She’ll be determined to help, but she’ll assure a Rey that she’s not getting back on the Adam roller coaster.

After a “Shey” sex session, Sharon will sense something in the hallway. She’ll put on a robe to take a look, but there won’t be anyone there. When Sharon returns to Rey, she’ll still seem a bit rattled. In Genoa City, Cane Ashby (Daniel Goddard) will share his plans with Devon Hamilton (Bryton James). He’ll admit he met with someone from a non-profit organization that helps give prisoners a second chance.

Cane will think he can make a difference there, and he intends to sell his home as well. Devon won’t think Cane should be making all these changes in his life for Lily Ashby’s (Christel Khalil) sake. She’s made it clear where she stands. However, Cane will be adamant that he’s doing this for him. He’ll want to be a better man, so this is how he’s choosing to rebuild himself.

Other Young and the Restless spoilers say Traci Abbott (Beth Maitland) will do some writing. She’ll focus on two characters named Flynn (Daniel Goddard) and Iris (Christel Khalil), who are obviously modeled after Cane and Lily. Iris will show up looking for Flynn’s help since he’s a private eye. When Flynn argues that Iris is simply in love with him, she’ll give him a good slap!

Traci will take a break from her work when Cane calls. He’ll want to chat, so they’ll meet and open up to each other. Cane will appreciate that Traci still holds out hope for “Lane.” When Cane asks how Traci’s doing, she’ll confide that dealing with Dina Mergeron (Marla Adams) is both challenging and rewarding. Traci will also admit that she hasn’t been pleased with the sibling rivalry within her family.

After Traci fills Cane in on her book idea, he’ll let her resume what she started. Cane will also promise Traci that even if he doesn’t get his happy ending with Lily, he’ll be all right. At the penthouse, Jett Slade (Gilbert Glenn Brown) will sing with Ana Hamilton (Loren Lott) and Tessa Porter (Cait Fairbanks). When Devon walks in, he’ll get an idea about putting on a tribute show at Society and dedicating the space to Neil Winters (Kristoff St. John).

Afterward, Elena Dawson (Brytni Sarpy) will admit her guilt to Devon. She’ll feel responsible for her mom’s death, but Devon will reassure her. He’ll believe Elena can choose to let go of that guilt. Later, Devon will dream of Hilary Hamilton (Mishael Morgan) and awaken to see her face sitting before him. Too bad it’ll actually be Elena’s face! That’ll bring some awkward moments when Devon plants a kiss.

While Devon offers Elena an apology, Mariah Copeland (Camryn Grimes) will get another text from her stalker. This one will insist that he or she isn’t going away and knows how to find Mariah. Tessa will spook Mariah when she joins her at Crimson Lights. She’ll be irate after she hears about the new messages, so she’ll text this person back and urge him or her to share what the problem is.

Tessa’s message will also suggest that maybe they can talk this out. Once Tessa updates Mariah on her much-improved recording session, another text will come in. However, it won’t be from the stalker. Tessa will think she might’ve scared off the culprit, but Mariah won’t be sure that’s what they really want.