BY Heather Hughes on January 21, 2019 | Comments: one comment
Related : Soap Opera, Spoiler, Television, The Young and the Restless 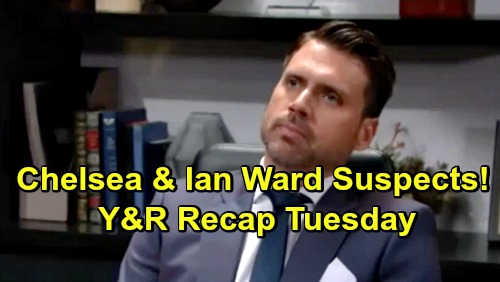 The Young and the Restless (Y&R) spoilers update and recap for Tuesday, January 22, tease that Nick Newman (Joshua Morrow) will have a chat with Michael Baldwin (Christian LeBlanc). He’ll insist that they have to get Victor Newman (Eric Braeden) off the hook ASAP. Nick will hope to figure out who’s behind the setup as well, but it’s not going to be easy!

Afterward, Nick will meet with Sharon Newman (Sharon Case). They’ll discuss Phyllis Summers’ (Gina Tognoni) insistence that Victor could be guilty, but Nick will defend his girlfriend. Sharon, on the other hand, will think Phyllis’ own behavior is the problem.

At Rey Rosales’ (Jordi Vilasuso) place, he’ll be taken aback by Mia Rosales’ (Noemi Gonzalez) grand plans. Mia will push for a public vow renewal as soon as possible. She’ll want all their family members and new friends to attend. Rey will decide he can get on board with that, but he’ll seem hesitant about Mia’s pick for his best man. She’ll think Arturo Rosales (Jason Canela) should do the honors.

Rey will cave in and agree to ask Arturo, so Mia will be pleased. Over with Phyllis, she’ll chat with Kerry Johnson (Alice Hunter) about Jack Abbott’s (Peter Bergman) exes. Kerry will note that Jack still seems to be on very good terms with all of them. He never badmouths them in any way.

Phyllis will suggest she’s fine with her exes as well, but a message about Billy Abbott (Jason Thompson) will leave her irked. She won’t be pleased that Billy took off in the Jabot jet unexpectedly. Soon after, Jack will get in touch with Kerry to set up a lunch date. She’ll have too much work to do, but she’ll wonder if Jack’s seen Billy anywhere. Jack will fib that he hasn’t seen his brother today.

After Jack hangs up, he’ll turn to Billy and grill him about getting home late. Billy will claim he was with a friend who just got some bad news. Later, Y&R fans can expect Billy and Phyllis to argue over the jet issue. He’ll insist that he can pay for the flight, but Phyllis will feel like he’s disrespecting her authority. The Young and the Restless spoilers say things will get heated, but Billy will ultimately offer an apology.

At Dark Horse, Nick will mull over potential Victor framers. He’ll throw out some names, including Chelsea Newman (Melissa Claire Egan), Luca Santorini (Miles Gaston Villanueva), Kevin Fisher (Greg Rikaart) and Ian Ward (Ray Wise). Jack will listen to Nick’s suggestions and wonder if his name is on the list, too. Nick will confess that he considered Jack as a possibility.

Jack will bring up Phyllis and her deep hatred for Victor, so Nick will admit he thought about her, too. However, he’ll struggle to believe that Phyllis would set Victor up to take the fall for this. Nick will eventually meet with Phyllis and Michael, who’ve been debating Victor’s guilt. Michael will note that Phyllis isn’t happy with their mission to free Victor.

Once they’re alone, Nick will want to concentrate on their relationship instead of all this drama. However, he’ll have flashbacks of all the people who are so convinced Phyllis is trouble. Back at the Abbott mansion, Cane Ashby (Daniel Goddard) will punch Billy and rant about him making Lily Ashby’s (Christel Khalil) ordeal worse. Billy will think Lily deserved to know the truth, but Cane will vow to make him regret this.

At the coffeehouse, Sharon and Rey will be sharing a close moment when Mia appears. The Young and the Restless spoilers say Mia will pipe up about the vow renewal. She’ll invite Sharon and a plus one of her choosing.

Finally, Jack will drop by Jabot to surprise Kerry with a picnic. When she’s nowhere to be found, Jack will give her a call. Kerry will lie about being stuck in the lab, but she’ll actually be in her car. After disconnecting from Jack, Kerry will call someone else to say she’s running late.

It sounds like another mystery’s underway on the CBS soap. We’ll give you updates as other details emerge. Stay tuned to Y&R and don’t forget to check CDL often for the latest Young and the Restless spoilers, updates, and news.