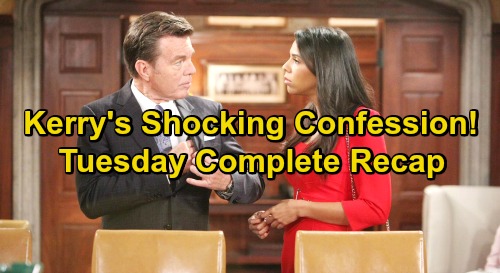 The Young and the Restless (Y&R) spoilers for Tuesday, January 29, tease that Victoria Newman (Amelia Heinle) will drop by the ranch with Katie Abbott (Sienna Mercuri). She’ll note that Katie wanted to come over again to play with her imaginary friend. Victor will laugh about the tot’s creativity before turning Victoria’s attention to business. He’ll want her to take the CEO spot while he’s stuck at home.

Victoria won’t know if that’s the best plan since it’ll require a lot of travel. However, Victor will offer reassurance. He’ll insist that Grandma and Grandpa can take the kids more often. Y&R spoilers say Victoria will eventually cave in. She’ll agree to Victor’s request and suggest they can work out the details.

At Jabot, Summer Newman (Hunter King) will surprise Kyle Abbott (Michael Mealor). She’ll apologize for pushing so hard for another chance and contend that she wants to make things right. Summer will hint that she likes being a mature businesswoman far more than the life of a party girl. She’ll think maybe she could tell Kyle about her new view over dinner, but he’ll decide to pass.

Summer will get where Kyle’s coming from and promise she can respect boundaries. She’ll embrace him before she exits, but don’t be fooled by Summer’s nice act! She’s got a few tricks up her sleeve that’ll be revealed later. In the meantime, Summer will pay Victor a visit at the ranch. Victoria will be there to greet Summer as well. They’ll both be happy that Summer’s been doing so well in Dubai.

However, Victor will admit he could use Summer’s help in Genoa City right now. He’ll encourage her to stick around and help Victoria, so she’ll accept the offer. After Summer leaves, Victoria and Victor will go looking for Katie. She’ll be saying she “won’t tell” just as her mom and grandpa arrive upstairs.

At the Abbott mansion, Jack Abbott (Peter Bergman) will sit Kerry Johnson (Alice Hunter) down for an honest discussion. He’ll confess that he peeked in her purse and found the syringe. Jack will wonder if Kerry has some sort of health issue, but she’ll promise it’s nothing like that.

The Young and the Restless spoilers say Kerry will claim it’s a personal matter, but Jack will want to know more. He’ll think there has to be a reason for all the deception. Jack will wonder if maybe Kerry’s on Methadone, so she’ll eventually admit the syringe is for hormone injections. Kerry will note that she’s planning to freeze her eggs just in case.

Jack will think they need to have a conversation about this, but Kerry won’t agree. She’ll point out that they don’t know where this is going yet, so she’s just keeping her options open. Jack, on the other hand, will think this is a very big deal. He’ll think Kerry’s life goals are quite different from his, so perhaps she’s with the wrong guy.

Over with Sharon Newman (Sharon Case) and Nick Newman (Joshua Morrow), they’ll spar over the secrets they kept from each other. Sharon will admit she nearly came clean just before their wedding. She wanted to tell the truth about J.T. Hellstrom (Thad Luckinbill), but the others convinced her to keep her mouth shut.

Nick will confess that he almost told Sharon the truth about his hookup that same night. They’ll mull over how things might’ve been different. If Sharon had told Nick why she was so upset about the J.T. impersonation plot, Nick won’t think he would’ve slept with Phyllis Summers (Gina Tognoni).

Sharon will suggest that Nick would’ve drifted back to Phyllis sooner or later. She won’t have any regrets about moving on. Back at home, Nick will tell Phyllis he would’ve done the same thing in her position. He’ll be grateful that she helped out the rest of the cover-up crew. Soon after, Summer will interrupt their make-out session to announce she’s moving in!

Other Young and the Restless spoilers say Abby Newman (Melissa Ordway) will drop by Mia Rosales’ (Noemi Gonzalez) place. She’ll think they need to clear the air about the proposal stealing Mia’s thunder. Mia will pretend it didn’t bother her, but she’ll offer an apology for her engagement dinner behavior anyway.

Of course, Mia and Abby won’t be sincere in this little chat. After Mia offers to do Abby’s hair and makeup, she’ll have a fantasy about chopping Abby’s long blonde locks off. It sounds like this rivalry is worse than ever! We’ll give you updates as other Y&R news comes in. Stay tuned to the CBS soap and don’t forget to check CDL often for the latest Young and the Restless spoilers, updates, and news.