The Young and the Restless Spoilers: Tuesday, May 7 – Nate is Abby’s Hero – Summer Scores Win Over Lola – Tessa Fights Stalker 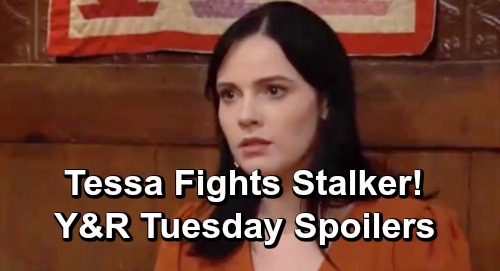 The Young and the Restless (Y&R) spoilers for Tuesday, May 7, tease that Nikki Newman (Melody Thomas Scott) will demand some answers. She’ll show up in Sin City, presumably after Nick Newman (Joshua Morrow) updates her on Adam Newman’s (Mark Grossman) survival. It sounds like a heated confrontation is on the way.

Nikki will likely corner Victor Newman (Eric Braeden) and admit she heard the news through Nick, who heard it through Sharon Newman (Sharon Case). She may wonder why she had to hear this through the grapevine, but Victor will surely be able to calm her down. Of course, they’ll have to address the issue of Adam’s return and what it’ll mean for their family when he gets his memories back.

Like Nick, Nikki may wonder if Victor’s sure this isn’t a scam or perhaps a lookalike. However, Victor will be adamant that this is the real deal. He’ll be fully convinced that this is their Adam and not some imposter. Meanwhile, Sharon will call Adam and leave him a message about meeting up. She’ll assure Adam that she just wants to talk and hope the poor guy doesn’t get spooked.

Speaking of spooked, Mariah Copeland (Camryn Grimes) will continue to worry about the threat she’s facing. Tessa Porter (Cait Fairbanks) will be busy singing with Ana Hamilton (Loren Lott) and Jett Slade (Gilbert Glenn Brown) for a bit, but she’ll eventually meet up with Mariah and realize something’s seriously wrong. Once Tessa pries the truth out of Mariah, she’ll text the stalker back with a challenge.

Other Young and the Restless spoilers say Dr. Nate Hastings (Sean Dominic) will rush to Abby Newman’s (Melissa Ordway) defense. When he spots Arturo Rosales (Jason Canela) pestering Abby for another chance, Nate will get rid of him. He’ll also make a bold move, so maybe Abby will get a dinner invitation. Nate seems interested, so this is the perfect chance to him to ask Abby out on a date.

Meanwhile, Summer Abbott (Hunter King) will manipulate Kyle Abbott (Michael Mealor) into doing what she wants. She’ll spin a last-minute business trip as something that could be huge for their project, but she’ll really just want to get Kyle away from Lola Rosales (Sasha Calle). Y&R spoilers say Summer’s plan will succeed, but not for long. Kyle will want to head back from New York the first chance he gets.

Summer will have to work harder if she wants to stay in the game, so she’ll step up her efforts later this week. The Young and the Restless spoilers say things will get tricky in this love triangle. We’ll keep you posted as other Y&R details emerge. Stay tuned to the CBS soap and don’t forget to check CDL often for the latest Young and the Restless spoilers, updates, and news.