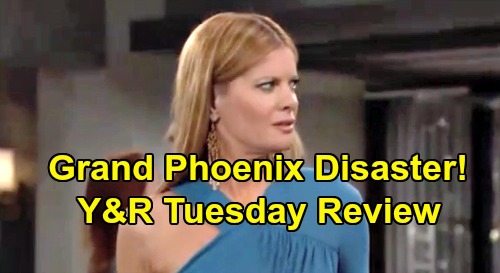 The Young and the Restless spoilers review for Tuesday, September 10, tease that the The Grand Phoenix opening will be in full swing and Abby Newman (Melissa Ordway) and Chelsea Lawson (Melissa Claire Egan) will be thrilled with how the night is going. Abby’s signature drink, The Grand Sangria, will be a hit with the guests, but unbeknownst to anyone, Zoe Hardisty (Anna Grace Barlow) spiked the pitchers of sangria with drugs.

As the evening progresses, various attendees will drink, while others don’t. Summer Newman (Hunter King) and Theo Vanderway (Tyler Johnson) will imbibe heavily, along with Sharon Newman (Sharon Case) and Rey Rosales (Jordi Vilasuso). Phyllis Summers (Michele Stafford) will decide not to drink for the evening, even though Zoe will try to get her to indulge in a spiked Grand Sangria.

Of course, for Zoe, the endgame here is to mess with everyone while capitalizing on the chaos. She’ll roam around the party and snap pictures of the goings-on, starting with a photo of an empty sangria pitcher, and move through the party snapping more pictures of partygoers getting high and acting goofy. She’ll think that the pictures will get her blog and social media feeds a lot of attention and followers.

But before things get too out of control, there will be a few significant developments. First off, Theo and Kyle will do their share of bickering after Theo jokingly-but-not-jokingly says that he should manage Summer’s career and prevent Kyle from taking advantage of her at Jabot. Lola will try to break up the tension by challenging Theo to a game of pool, but things will continue to degenerate between Theo and Kyle.

In addition, Sharon will notice that Rey is working the room and talking to various single women at the event. As it turns out, Lola will have encouraged a begrudging Rey to meet some women, but he won’t be too enthused about it. Mariah Copeland (Camryn Grimes) will notice the whole scene, and she’ll comfort her mother, who will be glad to be soon going away on a trip.

Around this point, people will start to get high on the drugs. Sharon will get hot and sweaty and stumble a bit, while Mariah and Tessa Porter (Cait Fairbanks) will act goofy and Theo will play air guitar with a pool stick. Devon will also find himself hot and sweaty, while Mariah, Sharon, and Tessa slur their words and act uncharacteristically crazy.

Right about this time, Theo will be canoodling with a very impaired Summer when he realizes that he’s high. They’ll compare symptoms and deduce that they’re high on Molly, which must have been in the drinks. This will scare Summer since they won’t know how much of the drugs they ingested.

Meanwhile, across the room, Nate will get hot and sweaty and he’ll have some visual hallucinations, which will alarm Chelsea and Abby, who will start to realize that something’s off. Rey will then have difficulty playing pool, and he’ll find Sharon who will be sobbing and

inconsolable over how she hurt him. Also drugged, he’ll console her, and they’ll kiss before Sharon passes out and Rey realizes that something’s not right.

And Sharon won’t be the only one with a medical problem. The drugs will cause Devon to suffer a panic attack, and he’ll have serious problems breathing. Meanwhile, Summer will approach Kyle and tell him that there’s Molly in the sangria before planting a sloppy kiss on him, which Lola will see and Zoe will capture with her phone.

Finally, Rey will realize that there may have been a mass drugging when Theo notices Sharon’s condition and remarks that she “should be coming down soon.” Rey will call it in to the station, and soon Paul Williams (Doug Davidson) and the EMTs will be on the scene. Paul will hope that the security cameras caught the perpetrator in action.

Fortunately, Paul will quickly get to the bottom of what happened, as Theo will let it slip that Zoe happened to give him is last Grand Sangria. Paul will want to question Zoe, but she’ll have left. Paul will get his motive when Tessa shows him the photos the Zoe posted of the party on her blog. Finally, Paul will shut down The Grand Phoenix, much to Chelsea and Abby’s horror.

Of course, the ramifications of the drugging will be huge. Aside from the serious health implications for Sharon and Devon, the whole thing will be a PR nightmare for Chelsea and Abby, as well as for Kyle. Given that Zoe snapped a photo of Kyle in what might look like a compromising position with an employee, he and Jabot could get some seriously bad press over the whole thing. And none of this is going to help Kyle and Lola’s relationship any. It’s a real mess.