BY Heather Hughes on April 23, 2019 | Comments: one comment
Related : Soap Opera, Spoiler, Television, The Young and the Restless 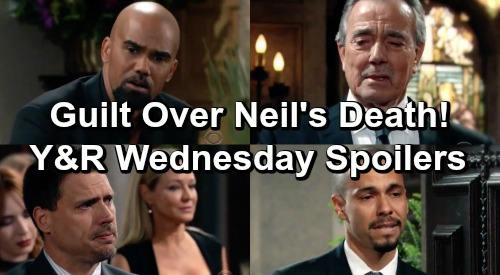 The Young and the Restless (Y&R) spoilers for Wednesday, April 24, tease that Neil Winters’ (Kristoff St. John) death will continue to send shockwaves. This certainly isn’t something his friends and family members expected, so it’ll be tough for them to come to grips with. Lily Ashby (Christel Khalil) will be especially broken up over the news. She’ll be desperate for an answer that no one can provide.

Neil was a seemingly healthy, vibrant man with many more years of life to live. Lily just won’t understand why this sudden medical crisis came out of nowhere. She’ll turn to Dr. Nate Hastings (Sean Dominic) as she tries to figure that out, but she’ll just end up berating him.

Lily will feel like Nate should’ve known this would happen. She’ll think there must’ve been some warning sign he could’ve picked up on. However, the truth is Lily will simply need someone to blame. In an interview with Soap Opera Digest, Christel Khalil explained what’s going on in Lily’s head and heart.

“Her anger gets directed at Nate because he’s a doctor and she wants to know why he didn’t see anything wrong with Neil,” Khalil said. “All of it’s irrational but it’s just a stage of grief that she’s going through.” Once Lily’s finished ripping into Nate, the blame game will carry on. This time Lily will blame herself and Devon Hamilton (Bryton James) will do the same.

“Lily and Devon also start having these feelings of it being their fault because they didn’t see what was going on with their dad,” Khalil said. The Young and the Restless spoilers say we’ll see some difficult scenes as Devon and Lily come together in sorrow. They’ll lean on each other for support, but the rest of the Ashby family will get in on this, too.

Cane Ashby (Daniel Goddard) will want to be there for Lily and the twins. Charlie Ashby (Noah Alexander Gerry) and Mattie Ashby (Lexie Stevenson) may feel responsible as well since they were the last two people to see Neil alive. They’ll undoubtedly wish they’d stayed behind with him and wonder if they could’ve prevented the tragedy.

Y&R viewers can expect word of Neil’s death to spread on Wednesday. The Young and the Restless spoilers say Nikki Newman (Melody Thomas Scott), Victor Newman (Eric Braeden), Jack Abbott (Peter Bergman) and Ashley Abbott (Eileen Davidson) will all be among the Genoa City residents who face heartbreak. They’ll be stunned and dismayed to learn Neil passed away long before he should have.

The Young and the Restless fans won’t want to miss Wednesday’s emotional episode, which will set up the funeral that’s still to come. We’ll give you updates as other Y&R details emerge. Stay tuned to the CBS soap and don’t forget to check CDL often for the latest Young and the Restless spoilers, updates, and news.