BY Heather Hughes on January 29, 2019 | Comments: one comment
Related : Soap Opera, Spoiler, Television, The Young and the Restless 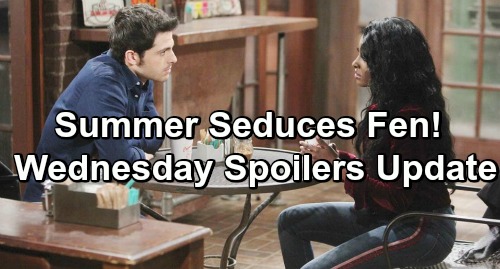 The Young and the Restless (Y&R) spoilers update and recap for Wednesday, January 30, tease that Summer Newman (Hunter King) will stir the pot as usual. She’ll waltz in Crimson Lights at catch Lola Rosales (Sasha Calle) off guard. Kyle will admit that Summer already stopped by to see him, but he’ll insist that she won’t be in town long.

Of course, Kyle doesn’t know that Summer intends to stay and help Victoria Newman (Amelia Heinle) at Newman Enterprises, but he will soon enough. For now, Kyle will just focus on Lola. She’ll be distracted with restaurant prep, but he’ll convince her to make some time for dinner with him.

Meanwhile, Summer will corner Fenmore “Fen” Baldwin (Zach Tinker) during his chat with Ana Hamilton (Loren Lott). After Summer and Fen catch up briefly, she’ll convince him to go out for a night on the town later. Since Fen’s supposed to be focused on his music, Ana will hit the roof. There may be a hint of jealousy behind Ana’s reaction as well, but she certainly won’t admit that.

Instead, Ana will gripe to Devon Hamilton (Bryton James) about Fen slacking off. He’ll wonder if they should drop him from the streaming label, but Ana will suggest giving Fen another shot. Talk will turn to Ana’s talent and how she could light a fire under Fen. Devon will hope to get Ana on board, but she’ll maintain that the spotlight just isn’t where she wants to be.

Back with Kyle and Lola, they’ll head to the athletic club on their date. Lola will still be stuck on all the restaurant drama, but Kyle will understand why it’s on her mind. Soon after, they’ll get a distraction. The Young and the Restless spoilers say Fen and Summer will arrive. They’ll eventually make out at the bar, so Lola and Kyle will be shocked by the free show.

Afterward, Fen will think they should take this party to a suite upstairs. Summer will insist she’s down for that, but she’ll want to say goodnight to Kyle first. Y&R spoilers say Summer will inform Lola and Kyle that she’s sticking around. Fen will finally get a clue and realize Summer’s just using him to make Kyle jealous. He’ll pretend he has a headache to get out of bedroom fun they were planning.

However, Summer and Fen will prove useful to each other at some point. There’s much more to come in this hot storyline. Next, Victoria will tell Victor Newman (Eric Braeden) about an interview that went off the rails. She’ll admit she lost it when she was grilled about J.T. Hellstrom (Thad Luckinbill) and the charges Victor’s facing.

Victor will think it’s good that Victoria stood up for herself. He’ll assure his daughter that he’s proud of her. After Victoria speaks about the abuse she endured, Victor will wish she would’ve come to him sooner. Nevertheless, Victor will vow to be there for Victoria now. They’ll ultimately join Katie upstairs, where she’s been playing with the friend she keeps talking about.

Someone will watch through a spy cam and eavesdrop through listening devices. It’s the setup for a kidnapping bombshell that’s happening later this week! In the meantime, Kerry Johnson (Alice Hunter) won’t want to give up Jack Abbott (Peter Bergman) or the possibility of having a child. She’ll think they should live in the moment. Kerry will contend that Jack might change his mind anyway.

Jack just won’t know if he’d be up for raising a kid with Kerry. He definitely can’t make any guarantees, so he’ll make that clear before Kerry heads out. Later, Jack will find Kerry looking blue at Jabot. He’ll hate how they left things, so he’ll hope to revisit their chat. Jack will determine that they should do this Kerry’s way. They’ll choose to focus on right now and see where life takes them.