BY hellodrdavis on July 19, 2019 | Comments: one comment
Related : Soap Opera, Spoiler, Television, The Young and the Restless 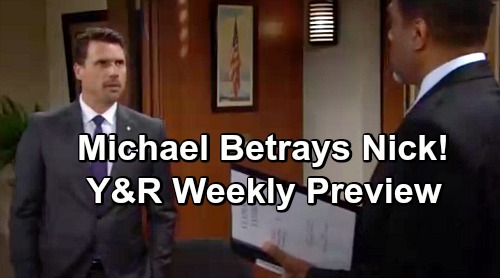 The Young and the Restless spoilers for the week of July 22, tease that the custody case brought by Adam Newman (Mark Grossman) against Nick Newman (Joshua Morrow) will get underway. As Y&R viewers know, Adam is suing Nick for custody of Christian Newman (Jamie and Alister Tobias), and Adam was planning on using Kevin Fisher (Greg Rikaart) to blackmail the judge with photos showing the judge in a compromising position.

Of course, that was before Michael Baldwin (Christian LeBlanc) intervened and approached Adam about making a deal. Exactly what the deal is that Adam and Michael agreed to remains to be seen, but it certainly looks like it may have to do with the outcome of the custody hearing. And since Michael is representing Nick in the custody case, that doesn’t exactly bode well for Nick’s case.

In next week’s previews, Nick is shown arriving to court and greeting the judge, but he’ll tell the judge that something has come up and indicate that Michael isn’t coming. What that means for Nick’s case isn’t clear, but ongoing The Young and the Restless spoilers do indicate that the custody hearings will go forward and that Nick’s JT Hellstrom (Thad Luckinbill) charade will come to light, which won’t look good for Nick.

Meanwhile, Sharon Newman (Sharon Case) and Chelsea Lawson (Melissa Claire Egan) will have a run-in at Crimson Lights. Sharon won’t be particularly glad to see Chelsea, and she’ll snark that Chelsea has “returned to the scene of the crime,” referring to when Chelsea viciously attacked Sharon at the coffeehouse before she left town the last time.

Finally, Y&R spoilers indicate that Billy Abbott (Jason Thompson) will make another unsettling discovery at the Chancellor estate. Y&R viewers will remember that he found the word “daddy” written on a side table at the house, which is something that he had previously dreamed about.

And if that weren’t strange enough, he’ll find another word scrawled on the wall. Y&R previews show Billy and Kevin finding the word “Adam” written on the wall at the Chancellor house. Billy will conclude that Delia Abbott (Sophie Pollono) wrote it and that “she’s trying to tell me something.” It will certainly be a haunting turn of events and will likely lead Billy straight to Adam for answers.

It sounds like a lot of Y&R drama is heating up for next week, so stay tuned! We’ll give you updates as Y&R news comes in. Stick with the CBS soap and don’t forget to check CDL often for the latest Young and the Restless spoilers, updates, and news.