The Young and the Restless Spoilers: Week of September 23 Promo – Adam’s Meltdown Sparks a Crisis – Victor’s Back – Theo’s Bloody Scare 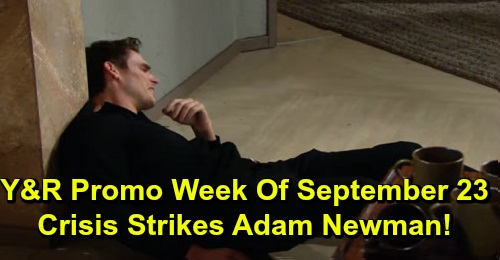 The Young and the Restless (Y&R) spoilers for the week of September 23-27 tease that Newman chaos will erupt. For starters, Michael Baldwin (Christian LeBlanc) will be under strict orders. Adam Newman (Mark Grossman) will want Victoria Newman (Amelia Heinle) arrested ASAP, so he’ll rev up the pressure until Michael makes it happen.

Rey Rosales (Jordi Vilasuso) will have no choice but to take Victoria into custody. That’ll send Nikki Newman (Melody Thomas Scott) flying into a panic. She’ll realize this whole scheme has gone awry, so she’ll be determined to turn things around. Of course, Nikki will need a little help with that. She’ll turn to the man at the center of this deadly charade: the great Victor Newman (Eric Braeden) himself.

The Young and the Restless spoilers say Victor will reappear to help Nikki cope. They’ll need to shift their strategy once Victoria’s behind bars. Nikki will fret about everything spiraling out of control and once again blame Adam. She’ll argue that Adam’s far more treacherous than they realized. Nikki will feel like they have to work twice as hard and be twice as sneaky if they want to pull this off.

As for Adam, his guilt will really take a toll. Adam believes his actions may have caused his father’s death and now he’s framing his sister for murder. He may be cold and calculating, but there’s a heart in there somewhere. At least a little piece of it will break knowing this is the man he’s turned into.

According to the new Y&R promo, Adam will look in the mirror at one point as if he’s having an identity crisis. Is this really the kind of person he wants to be? Adam will have to do some soul-searching and figure out if he can live with this darkness within him. Let’s hope Adam will change for the better at some point. Of course, he may wonder if he’ll even live long enough!

There’ll be some scary moments as Adam falls to the floor and seemingly clutches his chest at one point. Will the stress bring on a heart attack? There’s a chance it’ll be a panic attack or just grief instead, but Adam will definitely look like he needs some help. Who will come through for Adam? Perhaps Sharon Newman (Sharon Case) or Phyllis Summers (Michelle Stafford) will stop by at just the right time.

Over with Theo Vanderway (Tyler Johnson), he’ll pester Lola Abbott (Sasha Calle) in the kitchen at Society. Lola will be chopping away as Theo reaches a hand over. She’ll swat at Theo and raise her knife at him, but the real drama will come after she nicks her finger. It looks like Theo isn’t great at handling the sight of blood. He’ll pass out right in front of Lola, so she’ll stand there in shock.