BY Heather Hughes on February 5, 2019 | Comments: one comment
Related : Soap Opera, Spoiler, Television, The Young and the Restless 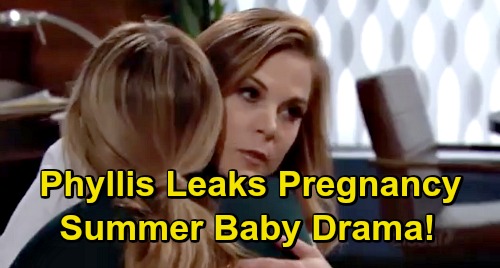 The Young and the Restless (Y&R) spoilers tease that the show may have a wild ride in store for Summer Newman (Hunter King) according to several recent hints. After she hooked up with Billy Abbott (Jason Thompson), many Y&R fans thought Summer might get pregnant. However, Billy already had an extra kid scare thanks to Chloe Mitchell (Elizabeth Hendrickson). Plus, his love life is enough of a disaster without adding a baby to the mix. We can’t blame Y&R for skipping a “Bummer” child.

Summer still needs a story though, so she’s currently pursuing Kyle Abbott (Michael Mealor). Once Summer realizes sex is off the table when it comes to Lola Rosales (Sasha Calle), she’ll see her angle. Summer will inevitably rev up the temptation and hope that Kyle caves in. She’ll probably feel confident that once Kyle gets a little taste, he’ll keep coming back for more.

Of course, there’s a good chance it won’t play out exactly like Summer plans. Since Kyle’s feeling distant from Lola and she’s growing concerned about Summer, “Kola” may be poised for another blowup. Meanwhile, the lines between passion and anger could be blurred for Kyle. He’s definitely attracted to Summer, so he may not be able to help himself.

This could easily lead to a hookup while Kyle and Lola are on a break. Whether it’s something Kyle hides or not, he may make it clear afterward that Lola is the one he really wants. Kyle may view this potential sex session as just that – sex and nothing more. He’s always had a thing for Summer, but he seems to prefer Lola now. It’s just been hard for Kyle to wait on making love.

In Kyle’s defense, The Young and the Restless hasn’t let him have a hot night since Mealor debuted in the role! What are they waiting on? Kyle had a close call after he won a bet with Summer, but he backed out since it wouldn’t have been “real.” Mealor’s got quite a buff bod to show off, so there’s no reason why Y&R shouldn’t let Kyle have some love in the afternoon.

Since lovemaking between Kyle and Summer is a good possibility, perhaps The Young and the Restless will finally take the pregnancy route. It’d be nice for someone in the younger set to put a bun in the oven. When it comes to unplanned pregnancies, soaps often go with characters who are barely within the childbearing age range.

Summer would also make a terrible mother at this point, which is all the more reason to make her one! Maybe a baby could help her grow up a bit. The Young and the Restless spoilers offer a leak in Tuesday’s episode as well. Phyllis Summers (Gina Tognoni) assures Summer that their love is unbreakable. She contends that Summer will understand one day when she’s a mom.

Summer laughs and suggests that Phyllis shouldn’t wish that on her. Nevertheless, it’s potentially been spoken into existence. Could Summer become a mom just like Phyllis predicted? Will it happen sooner than either of them expects? We’ll give you updates as other Y&R news comes in. Stay tuned to the CBS soap and don’t forget the check CDL often for the latest Young and the Restless spoilers, updates, and news.