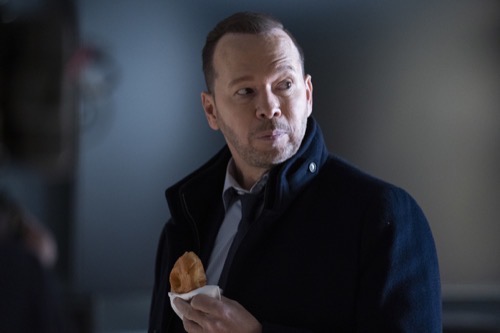 Tonight on CBS their hit drama starring Tom Selleck Blue Bloods airs an all-new Friday, December 11, 2020, episode and we have your Blue Bloods recap below. On tonight’s Blue Bloods Season 11 Episode 2 “In The Name Of The Father,” as per the CBS synopsis,“Danny and Jamie combine forces to convict a notorious drug lord, as Erin nervously awaits the Governor’s selection for the new District Attorney. Also, Frank and his grandson, Joe Hill, face a difficult decision as they navigate their new and complicated family ties.”

Danny and Maria arrive at a scene, Jamie is already seen. The victims name is Reggie Williams, he was shot in the head, he was scheduled to testify against John Marconi this week.

A woman is ordering a sandwich, her daughter is giving her a hard time. The daughter, Jennie, sees a man put a doll on a freezer near a door and when she goes to get it, the man abducts the child. An off-duty cop sees it happen, he catches up to the perpetrator and manages to pull the guy out of the van and save the girl. The off-duty cop is detective Joe Hill. Garrett says he is going to be the new poster boy for the NYPD. Sidney says he is the new Tom Cruise and the best PR the department has had in a long time. Frank knows that he needs to speak to his grandson.

The DA is arrested, Erin’s case is over. Meanwhile, Reggie’s mother says she told him not to testify. Danny says they think Marconi’s lawyer game him her son’s name. There is a new law, where they have to give up the name. She says she had a fight with her son in the morning, and she pretended he wasn’t even there because she was mad. Danny looks at Reggie’s daughter and tells her that her daddy was a hero. The little girl tells her grandmother that she needs his daddy and to make him come back. Danny says he is there, he can see him inside her heart. He asks her to tell her dad that they are going to find the people that did this and they are going to pay, that is a promise.

Anthony and Erin are looking at a video of when the DA confronted Erin and she told him it was game over, Anthony thinks is hilarious and he also thinks she is a slam dunk to be the new DA.

Maria and Danny go to see John Marconi’s lawyer and Danny tells him that because he gave his client Reggie’s name, he is now dead. Danny tells the lawyer, that he promised Reggie’s little girl something, and he is going to keep it.

Frank’s grandson Joe is in his office, Frank tells him that he is uncommon, there are not a lot of guys who jump in a speeding van. Joe says it happened, he reacted, it was nothing more than that. Frank tells him that some people in his office want him to become the poster boy for the NYPD, like Tom Cruise before one of this big movies comes out; he gets to tell his story over and over again, and act like it is the first time he is telling it. But something may come out with it, the truth, that he is his grandfather and related to generations of NYPD. Frank warns him that it is not something he can take back. Joe asks why would he want to.

Danny is over to see Erin, her secretary tells him that he can’t see her, she said she doesn’t want to see anyone. Danny goes to see Anthony, who tells him to wait to the Sunday dinner to speak to her. Danny tries to bribe him with sports tickets.

Danny, Maria and Jamie go to see Marconi at his residence, they have a search warrant. Marconi turns up the volume on the TV very loud while the house is searched; they find nothing, Marconi laughs at them.

When they are outside, Marconi’s kid arrives home.

Anthony finds Erin in his office, she says she is hiding because the governor’s men keep coming into her office and makes her feel like she is getting a colonoscopy.

Frank has a visitor, it is Paula Hill, she apologizes for showing up without notice. She makes a point of saying they are not family, she wants him to stay Joe Hill and don’t want the public to know who he really is. She asks him if he is going to claim him as one of his. She says he is all she has, and that is important to her. She tells him to talk to him, whatever it takes, she needs him to be a Hill. She says he will talk to him, at dinner on Sunday, and she needs to be there.

Danny, Maria, Jamie and Jenko are undercover. They ended up shutting down a lot of Marconi’s soldiers, but Danny doesn’t return to the station with them. Instead, he is outside Marconi’s house and they both stare down each other.

Later, Danny shows up at Marconi’s house with coffee. He tells Marconi that his soldiers are in jail and they will be there for a few days. Marconi’s son come out of his room, Marconi tells him to go to school. Marconi asks Danny if he has cuffs for him, if not, get the hell out. Danny leaves and tells him to enjoy his donuts.

Anthony stops by to see Erin, she is in with Kimberly, a college friend of hers who was visiting. Later, Erin goes to see Anthony, he asks her if Kimberly is single. Anthony did a little detective work and knows that Kimberly is not her friend. She is the other candidate that the governor is considering for the DA job. She just showed up and thought it might be a good idea for the two of them to know each other, Erin says she hates her.

Danny and Jamie are following Marconi’s son when he swerves, they pull him over for the violation. His id says Furturo. Danny and Jamie smell something. Danny tells him that Jamie is going to search the car, and he wants to see his registration. The finds drugs and money in the car. Later, Danny has Marconi and his son in the precinct, Danny tells Marconi that he wants a confession that he killed Reggie. Marconi then sees his mother in cuffs, Danny laughs and says that it is a family reunion. Marconi wants his mom off, Danny says he is going to have to give him something else, the deal was for his son only.

Joe goes to speak to Frank, he says he doesn’t like being famous, baskin in the spotlight and he doesn’t even like birthday parties. He tells Frank that he wants to keep his relationship with him a secret. Frank tells Joe to get back on the street.

Marconi is in front of his lawyer, he tells him that he is in a bad way and not going down on his own. They both have a lot of dirt on them, his lawyer has him searched for a wire and then threatens him, says he will deny everything. Marconi says he paid him for this witness’ list, his lawyer calls him an idiot for paying him cash and asks him who the gangster is now. All of a sudden, Danny and Maria walks in, the lawyer’s security guard was an ex-cop and he was wearing a wire.

Erin is with Anthony, she aks him if she is a good person; he tells her for the record she is a wonderful human being, but she cheats at cards. The governor called, Kimberly Crawford is the next DA and he will be announcing it Monday morning, Erin is upset and can’t be happy for her.

At Sunday dinner, Joe is there with his mother and is told no phones and texting at the table. Eddie says it keeps you on your toes. Frank gets a call, he takes it. Apparently, someone found out who Joe is, the secret is out.