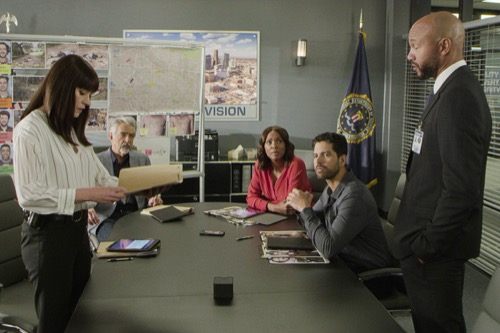 Tonight on CBS their hit drama Criminal Minds returns with an all-new Thursday, February 5, 2020, season 15  episode 7, called “Rusty,” and we have your weekly Criminal Minds recap below. In tonight’s Criminal Minds episode season 15 episode 7 as per the CBS synopsis, “The BAU team travels to Denver to investigate several murders. Prentiss is forced to evaluate her relationship with Special Agent Andrew Mendoza.”

Reid and Max got to have their happily ever after though not everyone can be so lucky. Prentiss for one was struggling in love. She was dating someone. It had turned into a long-distance relationship pretty much over night and it was hard on both of them. Andrew still cares for her. He was kind enough to send flowers to her work and so Prentiss should have appreciated such a gesture and, for some reason, she couldn’t. She was already pulling away and she just couldn’t stop herself. Prentiss love life was a tangled mess.

She was doing her best not to deal with it. So, work was the perfect excuse. The team was alerted to a new case because someone posted a video online with a decapitated head. The video originated in Denver and three bodies had been found without ahead in the area. The team had to go to Denver and so Prentiss was confronted by her situation. Her long-distance boyfriend was stationed in Denver. He transferred to be close to his daughter and so this case was the first time Prentiss had seen her boyfriend in two months.

It was an awkward moment seeing each other again. Andrew had wanted to talk about it and Prentiss told him after the case. They needed to find the Unsub that was decapitating these victims. The first looked for any connection between them and they couldn’t find one. The three victims were all different ages, lived in different areas, and they weren’t even in the same earning bracket. The only thing they all had in common is that they were around children. One was adopting a child and the other two dealt with children.

The Unsub was targeting fathers/father figures. It was clear he was having a psychotic break and later evidence proved it. The Unsub killed a fourth man. This time he was seen talking to himself and asking the air “is it enough?”. That coupled with what else they found – the team was ready to give their profile. They determined their Unsub believed he was living in an alternate reality and the delusion was so strong that he believed killing his victims was the only way to cross over. It was called the Mandela Effect.

There were genuine people that believed Mandela died in prison. This syndrome was right up there with false memories syndrome and it wasn’t that easy to heal. The delusion was just too strong. The team put out a warning to the public that he was not to be confronted only the Unsub changed things up. He was targeting fathers because he was one. His hatred towards them was misplaced hatred of himself and he eventually changed things up. He knocked out a father and kidnapped the man’s two kids.

The Unsub did at least leave a tablet behind with a video. In this video, he talked to his son Ethan and he said that seven years ago he accidentally traveled to a different reality. The team handed this video over to Garcia who identified their Unsub. His name was George Kyle Peters and he used to be a teacher. He was driving his son home one day when they got into an accident. They hit some black ice and his son was decapitated. Kyle was put in a coma and he later woke up to a world where his son was dead.

Kyle has been denying that reality ever since. He believes that he get to a world where his son is still alive and that way he doesn’t have to feel guilty. Kyle technically shouldn’t have had custody of his son. He bribed the caseworker during his custody case and that’s how he got Ethan despite his drinking problem. Kyle was probably drunk on the night his son died. He received a call from the caseworker after he woke up and together they crafted a story about black ice. That way no one would know he was drinking again when his son died and the caseworker wouldn’t have faced jail time.

The anniversary of Ethan’s death happened two months ago. It was the stressor for Kyle and that’s when he started killing people in the belief it would reunite him with his son. The team turned to the caseworker for a better picture of Kyle and she told him about the old gold mines. Its where Kyle used to take his son. The team went there and they spotted Kyle right as he attempted to kill one of the kids. He thought to kill a child would return his own child to him and so the team forced to acknowledge it was a delusion.

They made him open eyes and, in doing so, he couldn’t kill the teenage boy. Kyle handed himself in and the two kids were later returned to their mother. But Prentiss stayed on. She went over to Andrew and she had dinner with him and his daughter. It was the first time she was meeting the daughter and so she had been a little nervous at first. And thankfully the rest of the meeting had gone perfectly.