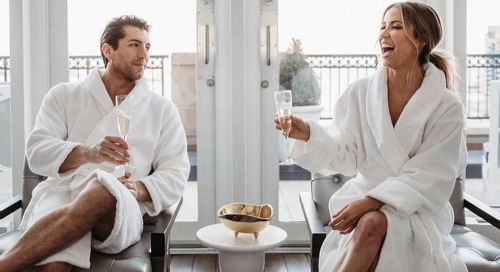 Dancing With the Stars spoilers reveal that we are getting some information on the cast members lives off-screen. When it comes to Kaitlyn Bristowe, she admitted that her boyfriend, Jason Tartick, sleeps in another room. Before you jump to conclusions on romantic drama, keep reading to find out the super-sweet reason why they sometimes sleep apart.

Kaitlyn and her dance partner, Artem Chigvintsev seemt to have a good on-screen relationship. Even though the Bachelor Nation alum recently came under fire for being too “touchy-feely” with Artem, by all accounts, they seem to work well together.

When Kaitlyn isn’t rehearsing or performing in front of cameras, she focuses on her podcast, Off The Vine. Kaitlyn plans on inviting Artem on the podcast.

However, Artem and Kaitlyn’s relationship goes beyond the cameras. It’s only natural that people who work together — or perform together in this case — will develop a personal relationship. Now, don’t jump to conclusions… their off-screen relationship is professional and platonic.

Artem seems committed to his relationship with fiancee, Nikki Bella. They are also quite busy bonding with their new baby. It has been mentioned that Artem is a total professional on DWTS.

Jason Tartick Sleeps In Another Room

Dancing With the Stars spoilers reveal that Kaitlyn made a confession while speaking with TV Insider. Her boyfriend sometimes sleeps in a different room. However, they are not having relationship problems. It turns out that Jason has a very sweet and thoughtful reason for letting Katilyn sleep alone.

“He helps in ways where he massages my feet, makes me coffee in the morning, and he makes sure I get my proper rest at night. Sometimes, he’ll go and sleep in the other room just so his snoring isn’t waking me up.”

Dancing With the Stars Spoilers: Kaitlyn Bristowe Has Best Boyfriend Ever?

Anyone who has ever been involved with someone who snores knows how frustrating it can be to get decent sleep. Most women would push their partners out of bed or kick them hard to try and stop the snoring.

But Jason knows he snores and realizes that it’s important for Kaitlyn to get her beauty rest. So, he voluntarily sleeps in another room so she can get proper rest. This just might make him the best boyfriend ever!

What do you think of Kaitlyn Bristowe’s boyfriend sleeping in another room? Let us know what you think and come back to CDL for show-stopping Dancing With the Stars spoilers, news and updates.