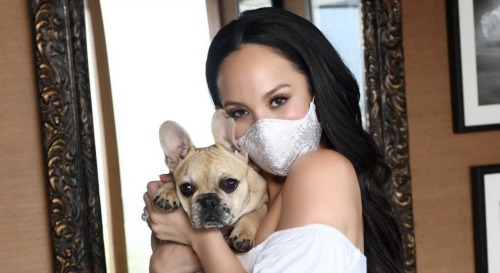 Dancing With the Stars spoilers reveal that Cheryl Burke isn’t one to mess with, at least in the ballroom! The dancing pro admits she has caused a lot of injuries to contestants, including breaking the arm of a celebrity. Former co-host Tom Bergeron was forced to cut to a commercial break when it happened. She also managed to injure a football player!

DWTS spoilers reveal that Cheryl appeared on the October 21 episode of The Kelly Clarkson Show. During the conversation, the pro dancer recalled a lot of memories and some of them were pretty shocking!

She admitted to the singer and TV host that she is responsible for hurting a football player, fracturing feet and breaking someone’s arm.

Even though football players are pretty tough, that doesn’t mean that they can’t get hurt. Playing football uses completely different muscle groups than dancing. Last season, Ray Lewis ended up actually getting injured just by being Cheryl’s dancing partner.

She admitted that Ray was the very first football player that she hurt during her long time on the dancing competition series.

Dancing With the Stars spoilers reveal that Cristián de la Fuente’s arm got broken on live television during a samba. At the time, the end of the dance had a dip and Cheryl’s head slammed to the floor. Tom ended up having to cut to a commercial break due to the broken arm.

Cheryl also admitted to fracturing Tom Delay’s feet during one routine. Of course, none of the injuries were intentional. With that being said, ballroom dancing and rehearsals are extremely intense, which makes injuries common.

Dancing With the Stars Spoilers: An Extreme Sport

Cheryl explained to Kelly that the learning curve is very steep. They have to learn the routines by practicing seven days a week for three months straight. Since many of the contestants aren’t professional dancers, they end up using parts of the body that they aren’t accustomed to using.

That can definitely be difficult for anyone, but it sure gives us a whole new appreciation for those dancing — both professionals and those who are new to the ballroom floor.

What do you think of Cheryl Bruke admitting to hurting a football player, fracturing feet and breaking arms of her dance partners? Tell us what you think and come back to CDL for shocking Dancing With the Stars spoilers, updates and news.