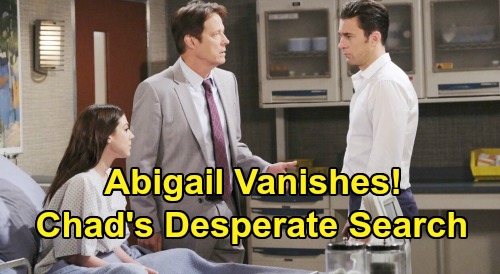 Days of Our Lives (DOOL) spoilers tease that Chad DiMera (Billy Flynn) will keep his promise. He insisted that if Rafe Hernandez (Galen Gering) wouldn’t do his job, then Chad was going to do it for him. Chad’s convinced that Gabi Hernandez (Camila Banus) drugged Abigail DiMera (Kate Mansi) to make her think she was losing her mind again. There wasn’t enough evidence for Rafe, so Chad will hope to find some.

This should lead to some digging along with some crucial confirmation. It turns out this drug has DiMera ties. It was developed by a DiMera – or perhaps somebody close to one.

Chad will naturally think that serves as proof of Gabi’s guilt, but there’s more to the story here. All the signs may be pointing to Gabi, but this case won’t be that easy to crack.

Unfortunately, Days of Our Lives spoilers say Abigail will face more hallucinations in the coming weeks. It won’t make much sense to Abigail since the drug’s no longer in her system, but it turns out it’ll alter the chemistry of her brain.

Abigail will be frustrated when she continues to struggle with these warped fantasies. She won’t be able to tell what’s real and what’s all in her head.

Days spoilers say Chad will support Abigail in any way he can. Until they can find a solution and get Abby’s brain chem back to normal, Chad will think she should be hospitalized.

Of course, Chad was adamant that he wouldn’t put Abigail back in a mental institution. It looks like Abigail will be admitted to Salem University Hospital again – just until they can figure all this out.

Soon after, Days of Our Lives spoilers say Abigail will vanish! She’ll disappear right out of her bed at the hospital, so Chad will suddenly face a new mystery. He won’t understand where Abigail went or why.

After all, Abigail’s hallucinations simply come and go. She’s completely lucid the rest of the time, so this doesn’t seem like a move she’d decide to make on her own.

Will Abigail be kidnapped? Could someone use these hallucinations to lure Abigail into a trap? Vivian Alamain (Louise Sorel) seems like the perfect culprit here – particularly since she has DiMera ties. That would explain the DiMera drug connection.

Regardless, Days of Our Lives spoilers say Abigail’s exit is coming up in June. It would be weird for this hospital disappearance to be Abigail’s departure. Would DOOL really just leave it dangling like that? Especially since we don’t know for sure who the drugging culprit is yet?

Perhaps Abigail will eventually turn up once the drugging culprit’s revealed. Days might provide a bit more closure before Abigail’s truly gone. Abby could always pay another visit to her grandmother, Dr. Laura Horton (Jaime Lyn Bauer), as her final exit later. It’ll be interesting to see how all this plays out!