BY hellodrdavis on February 10, 2020 | Comments: one comment
Related : Days of Our Lives, Soap Opera, Spoiler, Television 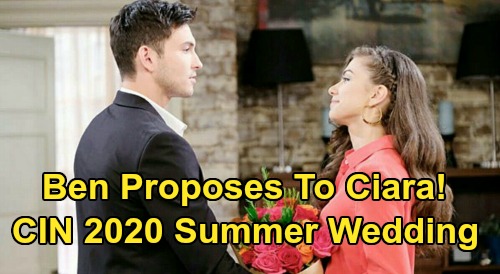 Days of Our Lives (DOOL) spoilers tease that the obstacles in the way of a Ben Weston (Robert Scott Wilson) and Ciara Brady (Victoria Konefal) 2020 wedding seem absolutely insurmountable right now. Proposing marriage to Ciara is probably far from Ben’s mind right now but after a daring escape from Statesville coming up this week, February 10-14, life might gradually start getting better for CIN.

Ben is facing execution in a matter of weeks, and he and his father Clyde Weston (James Read) are currently trying to bust themselves out of prison. It’s a desperate move, but Ben doesn’t feel like he has any other choice. After all, it’s escape or face certain death.

Well, according to DOOL spoilers, Ben will make it out of prison during the escape, although Clyde will have to be left behind. It will be a harrowing experience, but once Ben makes it to the meeting point, he won’t know what to expect, since his dad planned the escape.

Ben will be incredulous to find Ciara waiting for him at the meeting point, having worked with Clyde to plan the whole thing.

This is all very exciting and romantic, but soon reality will set in. Ben will have to decide what he’s going to do from here, and Ciara will feel that since they could get caught at any moment, they really need to figure out who actually murdered Ben’s sister Jordan Ridgeway (Chrishell Stause) so they can formally get Ben exonerated.

It’s certainly looking more and more like Evan Frears (Brock Kelly) is Jordan’s killer and the father of her son David Ridgeway (Jaxton and Dexter Ellis). Days of Our Lives spoilers say that Ciara will soon float the theory that David’s biological father was the actual murderer.

It’s only a matter of time before everyone to realize that Evan could be David’s real dad. Once Jordan’s killer is caught Ben can truly breathe a sigh of relief and consider proposing to Ciara.

It doesn’t seem like Ben is going to be able to stay on the lam for long, so hopefully this storyline will get wrapped up in good time. And when it does, and things get settled for Ben and Ciara, CIN fans would love to see them enjoy some happiness.

In fact, if the storyline gets wrapped up by summertime, it would be a great time for a CIN wedding!

Of course, a lot of stars would need to align for a wedding between Ben and Ciara to occur. Ben would need to find a job, which could be tough given his history. Ciara will probably still have her lucrative Titan position, but Ben will want to get on his feet.

And they’ll probably have to work pretty hard to get the blessing of Victor Kiriakis (John Aniston) for their union. There may still be some obstacles in their way, but nothing as harrowing as Ben’s near execution.

Still, CIN fans would love to see a wedding by the summer, and for Ben and Ciara to finally get some happiness. Do you think that we’ll see CIN get married in 2020? Stay tuned to DOOL and don’t forget to check CDL often for the latest Days of Our Lives spoilers, updates, and news.