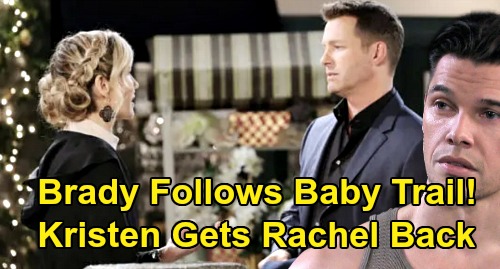 Days of Our Lives (DOOL) spoilers tease that the search for a bone marrow donor match will continue. DOOL fans know the situation is getting quite dire for poor Mackenzie “Mickey” Horton, who’s actually Rachel Isabella DiMera Black. Xander Kiriakis (Paul Telfer) and Victor Kiriakis (John Aniston) carried out a baby swap plot, so they’ll do everything they can to save Mickey AND keep that swap under wraps.

Of course, that’s already proving to be a tricky task. Brady Black (Eric Martsolf) was weirded out by Xander’s insistence that Tate Black should be tested.

After Brady pointed out that it was a longshot, he suggested that might not even be something Tate should be subjected to. Xander flipped out even more, so suspicions were definitely raised.

Xander got a lucky break when Kristen DiMera (Stacy Haiduk) just so happened to walk in on the discussion and volunteered to get tested. Days hasn’t revealed if Brady and Kristen are matches, but it doesn’t seem likely that they will be.

Why? Because then there’d be no need for Victor to contact Theresa Donovan (Jen Lilley), who’ll indeed get a call from Victor during the week of February 10-14.

Will Theresa put a fight just like Brady did initially? Will Victor have to plead for Mickey’s sake and hope Theresa doesn’t get too suspicious?

Whatever the case, Eric Brady (Greg Vaughan) and Sarah Horton (Linsey Godfrey) will receive updates regarding the donor search on February 12. That same day, Kristen will keep a surprising secret from Brady – presumably about her upcoming dreams of Rachel being alive.

We know Kristen will feel like Rachel’s calling out to her and needs her somehow. However, this clearly isn’t about pushing Kristen to get tested since that’s already happened. Perhaps Days means for this to be a puzzle piece that comes together along with a Tate match.

That’s the logical option based on current info. Kristen wouldn’t hesitate to save Mickey and has said as much. This seems to be more about working the “Rachel is alive” angle.

If Tate is indeed a bone marrow donor match for Mickey and Kristen eventually confides these dreams, Brady may have a stronger hunch that something’s up.

After all, Victor fired Brady just after the brutal loss of his child. It was a cruel shocker, even for Victor. Days of Our Lives spoilers say that’ll be another puzzle piece for Brady to ponder as the big picture comes together.

Brady may start to consider Xander’s suspicious behavior and why Victor would name him CEO of Titan at such a bizarre time. He might take another step toward the truth and try to figure out why Victor owed Xander.

Could this build to a secret DNA test? Will Brady set out to prove that Mickey is actually his daughter, Rachel? Days of Our Lives spoilers say Brady could be on the verge of reuniting Rachel and Kristen, which would make her the happiest woman in the world!

We’ll keep you posted as other DOOL news comes in. Stay tuned to the NBC soap and don’t forget to check CDL often for the latest Days of Our Lives spoilers, updates and news.