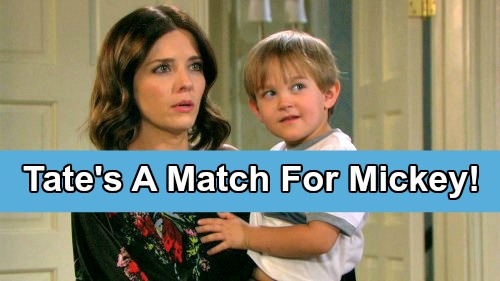 Days of Our Lives (DOOL) spoilers tease that Mackenzie “Mickey” Horton’s cancer crisis will get worse in the coming weeks. Despite Sarah Horton (Linsey Godfrey) and Eric Brady’s (Greg Vaughan) best efforts to save her, there won’t be anything else they can do. Mickey desperately needs a bone marrow match, but neither of her “parents” will work and they won’t have any luck finding another one.

Of course, Kayla Brady (Mary Beth Evans) pointed out Mickey’s best shot would be a full sibling, which Mickey doesn’t have. Even if Mickey’s true parents were revealed, a full sibling just doesn’t exist for her. However, Mickey does have a half-sibling and that seems to be where this story is headed next.

Days of Our Lives spoilers say Xander Kiriakis (Paul Telfer) will be desperate to save Mickey from a grim fate. He’s bonded with this little girl as if she were his own daughter. Xander certainly doesn’t want Mickey to lose her life – and he can’t bear the thought of Sarah going through that kind of pain.

Although Victor Kiriakis (John Aniston) doesn’t seem to feel all that guilty about the baby switch, even he will realize he can’t let his great-grandchild die – not if he can help it anyway. This baby is actually Rachel Isabella DiMera Black, Brady Black’s (Eric Martsolf) baby with Kristen DiMera (Stacy Haiduk).

Xander will be a mess and may rev up the pressure for Victor to do something. Time will be running out for poor Mickey aka Rachel. Days of Our Lives spoilers say Victor will make what could turn out to be a fateful decision. It’ll be one that could save Mickey’s life, but it could also lead to the baby swap’s exposure.

Days spoilers state that Victor will reach out to Theresa Donovan (Jen Lilley) during the week of February 10-14. He’ll probably push Theresa to get Tate Black tested as a potential bone marrow donor, which shouldn’t make much sense to Theresa or anyone else involved.

Since everybody thinks Mickey is actually Sarah and Eric’s kid, it’ll be strange for Victor to want Brady’s out-of-town son to be considered. To those out of the loop on this baby swap, it’s going to be a red flag. It should be an even bigger red flag when lo and behold, Tate is indeed a match – as Days buzz says he most likely will be.

Will this get the wheels turning for Brady? Even if Brady doesn’t figure it out just yet, this is bound to be a crucial puzzle piece. Once the truth about Maggie Kiriakis’ (Suzanne Rogers) accident inevitably comes out, DOOL spoilers say the rest should fall into place.

It sounds like some hot drama’s ahead for February sweeps! We’ll give you updates as other Days news comes in. Stay tuned to DOOL and don’t forget to check CDL often for the latest Days of Our Lives spoilers, updates and news.