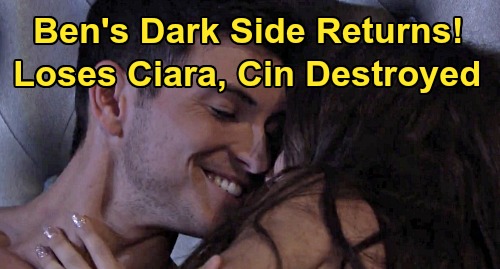 Days of Our Lives (DOOL) spoilers tease that Ben Weston (Robert Scott Wilson) will have some challenging times ahead. As DOOL viewers know, Ben’s recently been released from prison and he’s thoroughly enjoying his reunion with Ciara Brady (Victoria Konefal). The two have been spending lots of quality time together, and it seems that Ben and Ciara are as happy as can be.

In the coming days, DOOL spoilers say that Ben and Ciara will start talking about their future. They’ve missed out on a year together while Ben was in prison for a murder that he didn’t commit, and Ben and Ciara are ready to get their lives started and live life to the fullest.

Ben and Ciara will soon consider what they want their future to look like, and it should be a pretty exciting time.

But first, Ben and Ciara will need to look for jobs, which Days of Our Lives spoilers say that they’ll do soon enough. It should be a really exciting time for Ben and Ciara.

Well, additional Days of Our Lives spoilers indicate that there’s something that could derail Ben and Ciara’s happiness going forward…and it has nothing to do with Ben being falsely accused of a crime.

Rather, it has to do with Ben possibly committing a crime for real. According to DOOL spoilers, Ben will soon have a tense encounter with someone who will bring out his dark side.

Of course, DOOL viewers can’t forget that Ben has a very dark past. Ben was the “necktie” killer and he therefore has a violent history. But that was back when Ben was mentally ill and wasn’t taking any medication for his condition, and now the situation is of course very different for him. Ben has turned his life around, takes his meds, and has Ciara to walk the line for.

But when Ben soon encounters Evan Frears aka Christian Maddox (Brock Kelly), he’s going to feel a serious rush of rage and anger. Of course, Days viewers will remember that Evan killed Ben’s sister, Jordan Ridgeway (Chrishell Stause), and it looks like Ben’s going to totally lose it when he puts eyes on Evan.

In fact, DOOL’s spring promo video shows a terrifying scene, with Ben encountering Evan in the park, rushing hm, and putting his hands around Evan’s neck as if he’s going to strangle him. Ciara stands nearby watching in horror as the scene unfolds, and we can only imagine that she’ll intervene and get Ben to quit it.

But this has us thinking, since Ben is going to have to deal with Evan running around Salem ahead of his trial for murder. Right now, Evan is free on bail, and considering that this is Salem, there’s probably a good chance that he’ll totally walk free in the end. That should totally infuriate Ben, who may find himself stewing and wanting to enact his own kind of revenge.

We’ll see what happens here, but it’s possible that we could see Ben really struggle with the emergence of his dark side where Evan is concerned. And that could get in the way of Ben’s happy future with Ciara.

If Ben starts to be overcome with rage for Evan, that could get the people in Ciara’s life worried for her future with the reformed serial killer, or Ciara herself could doubt whether Ben’s fully reformed.

Even Ben himself might start to get worried about himself after the near-strangling incident with Evan. Just the fact that Ben’s first instinct will be to choke Evan might really worry him about himself, and about the potential damage he could do to Ciara and their future children someday.

What do you think? Do you think that Ben’s dark side will emerge and threaten his happiness with Ciara? Keep on watching Days of Our Lives and remember that we’ll keep you up to date on all the latest DOOL news here at CDL. We’re your trusted source for all he soap spoilers, recaps, and updates!