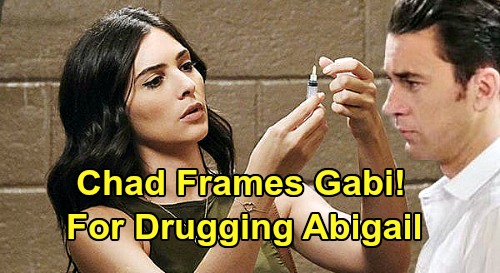 Days of Our Lives (DOOL) spoilers reveal that Chad DiMera (Billy Flynn) is desperate to take Gabi DiMera (Camila Banus) down. Chad’s fully convinced that Gabi drugged Abigail DiMera (Kate Mansi), which kicked off Abby’s latest nightmare. Now that the chemistry of Abigail’s brain has been altered, she can’t stop these hallucinations – no matter how much she wants to get back to normal.

Watching Abigail suffer is killing Chad, so his desire for revenge is revving up. Never mind that Chad has no real proof of Gabi’s guilt! Chad’s just got it in his head that Gabi did it, so he intends to make her pay. An intriguing opportunity just landed in Chad’s lap thanks to Gabi’s stunt at the garage.

Chad overheard Ben Weston’s (Robert Scott Wilson) conversation with Marlena Evans (Deidre Hall), which left Chad hopeful about locking in Ben’s help. Like Chad pointed out, Gabi just tried to drug another person against his will. Chad’s counting on Ben to be his eyewitness, but that could put Ben in a tight spot.

Jake Lambert (Brandon Barash) isn’t interested in bringing the cops into the latest Gabi drama. That’s partly because Jake has some buried secrets and doesn’t want detectives sniffing around. If this is actually Stefan DiMera (Brandon Barash), that’s another great reason to want Gabi left alone.

Regardless, Jake doesn’t want to turn this into a big thing – and Ben serving as Chad’s eyewitness could indeed turn it into a big thing. Chad might argue that Ben owes Abigail this after all the tormenting he did in the past, but Ben may still not be willing to go against his boss’ wishes.

Then again, maybe Ben will decide siding with Chad is the right call. Ben was concerned enough to take that syringe to Marlena and ask her to have the contents tested. That screams plot point! Ben knows Gabi is obsessed with Jake being Stefan again. Gabi wasn’t trying to harm Jake; she was trying to bring Stefan back.

Since Jake wasn’t injected, why should Ben really care what’s in the syringe? Although there can be side effects with this serum, Jake was never given a dose. There was no reason for Ben to go to all this trouble. DOOL’s main goal seemed to be Chad overhearing this discussion – and perhaps getting an idea of what to do with those lab results.

Whether Ben agrees to serve as an eyewitness or not, Chad could easily manipulate the analysis of what’s in the syringe. Chad needs to prove Gabi had access to that DiMera-developed drug, which hasn’t been released yet. Here’s his chance to provide some “evidence.” Will Chad make sure it looks like Gabi was about to give Jake the same drug?

It wouldn’t make sense for Gabi to give Jake anything other than the memory serum, but that’s not going to matter. If Chad rigs the results, the “facts” will be right there on paper. Days fans may watch Gabi go down thanks to Chad’s manipulation.

During the week of May 18-22, Days of Our Lives spoilers say Gabi will get grilled about her attack on Jake. Afterward, Lani Price (Sal Stowers) will place Gabi under arrest. Chad could set Gabi up to make sure justice is served for Abigail’s terrible ordeal.

Of course, it seems likely Gabi’s innocent on all counts here. Gabi doesn’t appear to be the one who drugged Abigail, so Chad could be in for quite a shock down the road.