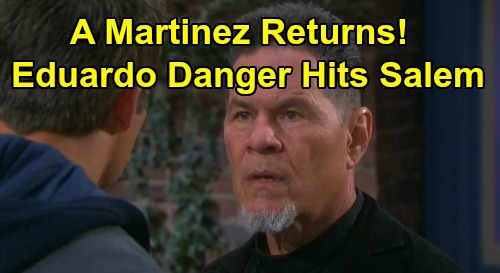 Days of Our Lives (DOOL) spoilers tease that trouble could be brewing for the Hernandez family and those closest to them. DOOL fans can expect Eduardo Hernandez (A Martinez) to become part of the story again down the road. It looks like Eduardo will return for some hot drama!

Let’s consider why Eduardo might be thrown back in the mix briefly. For starters, Justin Kiriakis (Wally Kurth) recently brought up Rafe’s criminal family and how that wasn’t a great look for the custody case. DOOL viewers may recall that Eduardo is a former assassin – and he’s currently doing a prison stint for stolen treasury bonds.

That criminal history of Eduardo’s may come into play at some point. Days of Our Lives spoilers say Rafe Hernandez (Galen Gering) will exit in September, so it’s easy to imagine Eduardo’s return setting that up. Will Eduardo’s past rear its ugly head? As a former assassin, Eduardo must still have some old enemies that could cause problems.

Of course, Will Horton (Chandler Massey) and Sonny Kiriakis (Freddie Smith) are also set to depart in September. As Arianna Horton’s (Sydney Brower) dads, could they get caught up in all this, too? Arianna is Eduardo’s granddaughter, so there could be a risk to her.

Days of Our Lives spoilers suggest that Will and Sonny’s exit won’t exactly be a happily ever after. Something will happen that spells trouble, which will take them offscreen a few episodes later. Since we know Rafe’s leaving around the same time as Will and Sonny, will they all be pulled into the same story?

Even if Eduardo remains in the slammer and is only seen there, he could face a threat that extends beyond prison walls. Eduardo’s family could easily be targeted: Rafe, Gabi, Arianna along with Will and Sonny as part of the package. This is clearly a pack-up-and-go-quickly exit for Sonny and Will. It sounds like they’ll have to run off in a hurry.

The tricky part is Arianna, who’s being raised by both “WilSon” and Gabi. Who does Ari end up with? It’s a puzzling and difficult situation all around. There’s been some insider talk about Gabi leaving the show around September along with Rafe, Will and Sonny. However, Gering, Massey and Smith are the only ones who’ve confirmed their departures.

Regardless, Gabi could certainly be part of an Eduardo danger storyline – no matter the outcome for her. As for Rafe, Will and Sonny, they’re indeed out. We could be gearing up for witness protection exits due to Eduardo’s shady past and any lingering enemies he might have.

Then again, Days may find some other way to include Eduardo, but there’s surely a good reason why he’ll finally pop up again. It should be exciting to see how it’ll all play out!

We’ll fill you in as other DOOL news and updates become available. Days spoilers say some stunning twists are ahead. CDL’s a great place to visit for Days of Our Lives spoilers, updates and news.