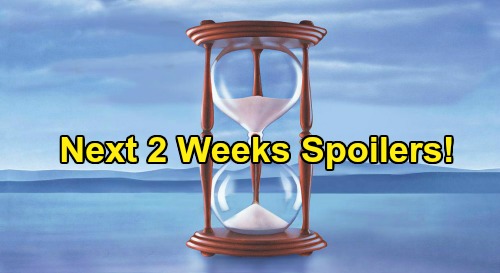 Days of Our Lives (DOOL) spoilers for the next two weeks tease that some big moments are coming up in Salem. During the week of May 11-15, the missing Rachel DiMera Black saga will come to an end. Kristen DiMera (Stacy Haiduk) will catch Sarah Horton (Linsey Godfrey) before she takes off with the baby. Although Kristen will seethe initially, it won’t take long to realize that’s not the right approach.

After Sarah launches a tirade about what an awful mother Kristen would be, Sarah will insist she’d be a much better mom to the kid. Days spoilers say Kristen will beg Sarah to understand how much she already loves Rachel. Kristen will manage to get through to Sarah, who’ll tearfully hand Rachel over.

After Xander finds them together, Sarah will unleash her wrath! She’ll make it clear that she hasn’t forgiven Xander and never will.

Back with Brady, he’ll push Kristen to take Rachel and run. It’s the only way they can be together since Kristen’s wanted for stabbing Victor Kiriakis (John Aniston). Days of Our Lives spoilers say Kristen will say an emotional goodbye to Brady and disappear with Rachel for now.

Meanwhile, Zoey Burge (Alyshia Ochse) will come clean to Rafe Hernandez (Galen Gering) about the night of the crash. After Zoey tells Rafe what really happened on Mother’s Day, he’ll be floored.

DOOL fans will see newly flashbacks that explain how Maggie Kiriakis (Suzanne Rogers) was drugged and framed. Maggie is innocent, so Rafe will really be thrown for a loop.

At the DiMera mansion, Abigail DiMera (Kate Mansi) will turn up following her recent disappearance at the hospital. After Abigail imagines Kate is Gabi DiMera (Camila Banus), she’ll freak over Gabi drugging a drink in front of her. It won’t actually be happening, but it’ll all feel very real to Abigail. Abe Carver (James Reynolds) will save Kate from harm and earn her gratitude.

During the week of May 18-22, Days spoilers say Chad DiMera (Billy Flynn) will present a treatment option to Abigail. They’ll eventually have to make some difficult choices about their future. DOOL spoilers previously confirmed Abigail would vanish – and she did. Abigail just didn’t go very far.

It’s possible Abby will vanish again since this clearly isn’t her first rodeo with vanishing, but it’s also possible Abigail will accept this treatment option and choose to leave town. Regardless, Abigail will be back – most likely after the big reveal of her drugging culprit. Chad will remain in Salem in the meantime.

Next, Xander will race to Statesville on a mission to save Maggie Kiriakis (Suzanne Rogers). He’ll end up frantically trying to revive Maggie – and we know Xander will succeed. Will Xander save Maggie following a suicide attempt? It sure looks that way!

Later, Xander will deliver an emotional plea. Days of Our Lives spoilers state that Xander will beg Sarah for another shot, so we’ll see how that works out. The fact that Xander saved Maggie may score him some points, but Sarah still probably won’t be ready to forgive and forget.

Kayla Brady (Mary Beth Evans) will also let Sonny Kiriakis (Freddie Smith) and Justin Kiriakis (Wally Kurth) in on some massive shockers, so they’ll hear yet another version of events about the crash.

Back with Orpheus, he’ll have kidnapped both John Black (Drake Hogstyn) and David Ridgeway (Caleb and Kyler Ends) at that point. Rafe will leap into action with Zoey backing him up, but he won’t know if he can trust her. It’ll be up to Zoey to convince Rafe she’s truly on his side.

However, Zoey will keep Rafe in the dark on a secret as they search for David and try to stop Orpheus’ reign of terror. It sounds like maybe Rafe shouldn’t trust Zoey after all!

Finally, Lani Price (Sal Stowers) will arrest Gabi DiMera (Camila Banus) after she’s accused of an attack on Jake Lambert (Brandon Barash). Gabi will find herself in familiar territory after she’s hauled down to the police station!

It sounds like the next two weeks will bring some serious excitement. CDL’s your hotspot for Days of Our Lives spoilers, updates and news.