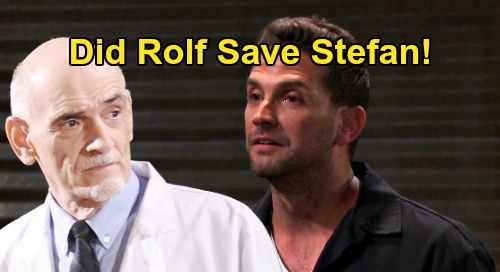 Days of Our Lives (DOOL) spoilers tease that Gabi DiMera (Camila Banus) will turn to the one person who might be able to help her. DOOL fans know Dr. Wilhelm Rolf (William Utay) is the ultimate miracle worker. Dr. Rolf has brought plenty of Days characters back to life with his serums, microchips and more.

Of course, the one patient that Dr. Rolf couldn’t save was Stefan DiMera (Brandon Barash) – at least what’s what the doc claimed. Gabi begged Dr. Rolf to do something after Stefan was shot and declared braindead, but Dr. Rolf insisted Stefan couldn’t come back from that.

There was no spark of life that Dr. Rolf could work with, but that explanation sounds awfully fishy if you ask us.

Dr. Rolf’s serum has brought cold corpses back to life before, so living and breathing Stefan shouldn’t have been an issue. We’re not buying the rewrite that Dr. Rolf merely brought people back from the brink of death.

What’s the point in having a back-from-the-dead doctor if he can’t bring everyone back? Why would Stefan be the only character Dr. Rolf couldn’t save? None of it adds up – and it won’t be adding up for Gabi either during the week of May 11-15.

Days spoilers say Gabi will grill Dr. Rolf about the Stefan lookalike who just showed up in town. Gabi knows this guy claims he’s Jake Lambert, but she doesn’t believe it for a second. There has to be another explanation in Gabi’s opinion, so she’ll hope Dr. Rolf can shed some light on that.

Gabi will undoubtedly demand to know if Dr. Rolf secretly saved Stefan. Did Rolf go behind Gabi’s back and bring Stefan back to life? Regardless, Gabi may have a hard time prying the truth out of Dr. Rolf.

If he did this and kept it a secret, Dr. Rolf must’ve had a good reason for it. That could involve DiMera loyalty or something else, but Dr. Rolf probably knows far more than he previously disclosed. Days of Our Lives spoilers say Gabi will hope to score a confession, but will she get one?

Soon after this conversation with Dr. Rolf, Gabi will try to help Jake with his memory. It sounds like Gabi will remain convinced Jake is Stefan whether Rolf admits it or not! Days of Our Lives spoilers say some hot drama’s brewing, so we’ll pass along other updates and news.

Do you think Dr. Rolf will confess to bringing Stefan back? Will Dr. Rolf deny it and leave Gabi to prove it herself? CDL will have other Days of Our Lives spoilers, news and updates, so be sure to pop back in often.