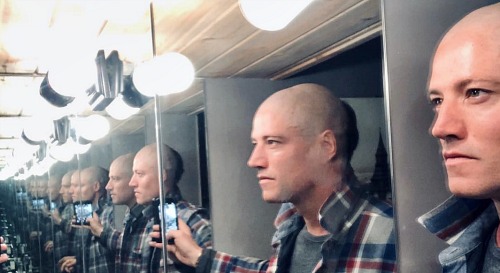 Days of Our Lives (DOOL) spoilers reveal that one NBC soap alum recently had a big announcement to make. DOOL fans will remember James Scott for his role as EJ DiMera. Scott was at Days from 2006 until EJ’s death in 2014, although EJ DiMera has since been resurrected.

It turns out Scott is also going through a resurrection of sorts. On his social media accounts, Scott showed off a bold move he made – one that was done to symbolically put the past behind him and start anew.

Scott said, “Marking the death of a past idea, dream, fantasy – illusion? Can be painful. I chose to shave my head symbolically so as to drop the past and leave it behind forever.” Scott posted a picture of his new look, which was certainly different than the long-haired look he’s been sporting in recent years.

Of course, this got many Days of Our Lives fans curious about the reason for Scott’s transformation. It’s common for returning soap stars to shave beards or get haircuts when they’re headed back to Salem – just as a way to get camera ready again. It was a reasonable thing for some viewers to wonder and ask about.

Unfortunately, that doesn’t seem to be what Scott’s doing based on his cryptic tweet and Instagram post. Days of Our Lives has suspended production anyway due to COVID-19 aka the coronavirus, so it’s not like anyone’s going back into the studio anytime soon.

Plus, Scott appears have found a new path since his DOOL departure. He’s never seemed very interested in making any kind of Days return. Scott’s message about leaving the past behind backs that up. His Twitter and Instagram accounts are now called The Whisper Within, which he also has a website for.

“In 2014, after a successful career in the entertainment industry, I found myself with everything and nothing,” Scott says on that website. “I had money, celebrity, and status and the grief to match it. I had worked tirelessly for the better part of two decades to attain wealth and validation, yet no external thing could touch the emptiness I felt and the worthlessness I experienced.”

Scott goes on to talk about finding peace at an Indian meditation center and discovering “the eternal wisdom of the whisper within.” The former Days of Our Lives star now hopes to inspire others to live his path, so it seems like Scott’s broken away from the entertaining biz completely and is focusing on other things.

Still, it’s good to see some updates from Scott – and never say never in the soap world! For now, we can look forward to Alison Sweeney’s return as Sami Brady later this year. Days of Our Lives spoilers say some shockers and shakeups are ahead in Salem, so we’ll fill you in as other DOOL news emerges.

Do you miss James Scott as EJ DiMera? CDL’s the place to be for sizzling Days of Our Lives spoilers, news and updates, so be sure to check back often.

Marking the death of a past idea, dream, fantasy – illusion? Can be painful. I chose to shave my head symbolically so as to drop the past and leave it behind forever.