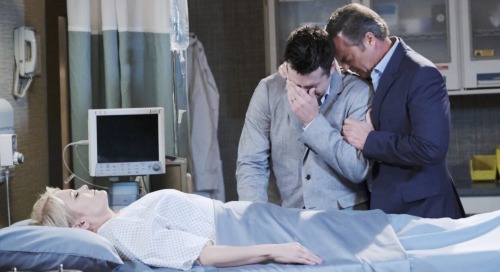 Days of Our Lives spoilers confirm Adrienne Kiriakis (Judi Evans) is dead. Even though it was a shock to the actress when she found out, Evans looked for the positive. She explained if she were ever to return someday, it could always be as her character’s lookalike, troublemaker Bonnie Lockhart.

DOOL spoilers reveal next week will be full of flashback scenes to fill in the holes missing from the one-year time jump. One storyline to expect is finding out how Adrienne died. It is said to be emotional and tragic. Not only does it take place on the evening of Mother’s Day, but Adrienne is one of three deaths that night.

In the latest issue of Soap Opera Digest, actress Judi Evans explained she was devastated to find out she was being written out of the soap. She has portrayed the character since 1986, so it was a huge chunk of her life.

However, after talking to an executive producer, she understands why it had to be done. It was a sacrifice, but Evan insists it is one that had to be made for the greater good of the soap.

Days of Our Lives spoilers tease that Salem’s history is filled with doppelgangers, mask wearers and twins (as well as triplets!). There are also a large number of resurrected characters as well as old faces being brainwashed or brain-chipped to play someone else.

Adrienne had a doppelganger named Bonnie Lockhart, who loved to cause trouble and turmoil. However, she wasn’t the only one. Dr. Marlena Evans had Hattie Adams, and Deidre Hall is currently playing both characters right now.

Evans said that there is a silver lining to Adrienne’s death. It means that the actress could always return someday as Bonnie. Even though she clarified that there are no plans to bring Bonnie back right now, you never know what will happen in the future.

Would you like to see Evans return, even if it is as Adrienne’s lookalike Salemite, Bonnie Lockhart?