Days of Our Lives Spoilers: Julie Shocked To See Jake – See Who Her New Heart Really Came From 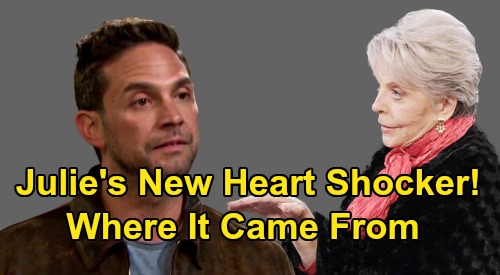 Days of Our Lives (DOOL) spoilers tease that Julie Williams (Susan Seaforth Hayes) will soon be in for a big shock. As DOOL viewers know, Julie is getting along very well with her donor heart. Julie went from being virtually at death’s door to miraculously saved when a heart suddenly became available from Stefan DiMera (Brandon Barash). Stefan was a compatible donor, and after some serious begging from Gabi DiMera (Camila Banus), Julie got the heart.

Well, now Gabi’s life has been turned upside down by the arrival of Jake Lambert (Brandon Barash) in Salem. Gabi is certain that Jake has got to be Stefan, since they look exactly alike, and she was on a mission to prove it with a DNA test when she got kidnapped by the mob guys who were after Jake.

It looks like without that proof, there won’t be a big revelation about whether Jake is Stefan for a while.

But in the meantime, it seems that Julie will get involved in the situation, as she lays eyes on Jake for the first time. That should be quite a shocker for her, since she’ll probably immediately think that Jake is Stefan.

Julie might wonder exactly whose heart she’s walking around with once she gets over the initial shock of the whole thing.

Ultimately, Gabi and Julie might just have something in common after all. Of course, the two women absolutely can’t stand each other ever since it came out that Gabi had rigged Julie’s pacemaker and controlled it with an app on her phone.

Julie and Gabi are sworn enemies, but might Julie want to get to the bottom of this Jake/Stefan thing just as much as Gabi does? After all, wouldn’t it behoove Julie to know whose heart she really got?

It seems like it would be important from a medical perspective for Julie and her medical team to know where her heart originated from. As CDL has previously theorized, it’s always possible that Wilhelm Rolf (William Utay) secretly saved Stefan and arranged for Julie’s heart to come from some other donor.

DOOL viewers will remember that Dr. Henry Shah (Piter Marick) was also killed right about the same time as Stefan was allegedly killed.

Who knows – maybe Julie got Dr. Shah’s heart and Stefan actually lived and is now running around as Jake. At any rate, Julie is going to probably have some major questions about her heart and its true origins, just like Gabi might want to get those same answers. Might we see Gabi and Julie work together for answers?

That might be asking a bit much, given how much Julie and Gabi detest each other, but DOOL spoilers are clear that Julie’s going to do a serious double-take when she sees Jake.

Do you think it’s possible that Julie never really got Stefan’s heart? Stay tuned to the NBC soap and don’t forget to check CDL often for the latest Days of Our Lives spoilers, updates, and news.