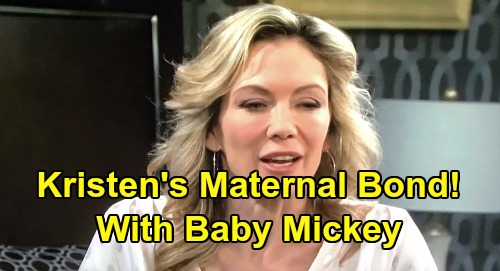 Days of Our Lives (DOOL) spoilers tease that Kristen DiMera (Stacy Haiduk) will soon find herself having some maternal feelings. As DOOL viewers know, she and Brady Black (Eric Martsolf) lost their little girl shortly after her birth…or so they thought.

In a stunning turn of events, Xander Kiriakis (Paul Telfer) and Victor Kiriakis (John Aniston) switched babies in the nursery, so that Kristen and Brady thought their baby died.

In actuality, the baby that died was that of Sarah Horton (Linsey Godfrey) and Eric Brady (Greg Vaughan), but as far as anyone knows right now, Kristen and Brady’s daughter was the one who didn’t make it.

It’s a terrible secret that Victor and Xander are keeping, and it has caused a lot of pain for Kristen and Brady. They split up after the loss, with Kristen running off to Rome to become a nun to escape from the pain.

Well, Kristen is back now, and she and Brady are rekindling their romance. They’ve bonded over the death of their daughter, little Rachel Black, and they are supporting each other as best they can through their ongoing grief. But as DOOL viewers know, Kristen recently had a dream that Rachel was alive, and it was quite disturbing for her.

Of course, the source of Kristen’s dream could very well her maternal instincts trying to tell her that her daughter is still alive. It’s a truth that her brain simply can’t process, since she’s under the belief that Rachel passed away in the hours after her birth.

But soon, it seems that Kristen will find herself preoccupied with Sarah and Eric’s little girl, Mackenzie Brady, who in reality is Rachel.

According to Days of Our Lives spoilers, Kristen will spend some time around Mackenzie, which was inevitable, given that Brady and Eric are brothers. Of course, this is something that Xander and Victor probably aren’t going to be happy about, given that they know that Mackenzie is really Rachel. But there won’t be much they can do about it, as Kristen in particular finds herself drawn to Mackenzie.

We’ll see exactly how things transpire, but it looks like Kristen’s maternal instincts will start to kick in when she’s around Mackenzie. She and Brady will probably just chalk it up to her thinking about the baby that she lost, but DOOL viewers will know that Kristen will actually be feeling the bond to her own child. She’ll probably be confused by the feelings, but they’ll definitely be there!

DOOL spoilers also say that Kristen will end up approaching Eric and asking if she can hold Mackenzie. We’ll see if Eric says yes, and Kristen could wind up feeling quite confused if he does. She’ll be holding her own daughter, and surely she’ll feel something.

At any rate, DOOL viewers should look for Kristen to get more and more drawn to Mackenzie as time goes on. Of course, it’s only a matter of time before the secret bursts wide open, but how and when this happens remains to be seen.

Do you think Kristen will feel a special bond to Mackenzie when she holds her? Be sure to stay tuned to DOOL and read CDL regularly for all your latest Days of Our Lives news, spoilers, and updates.