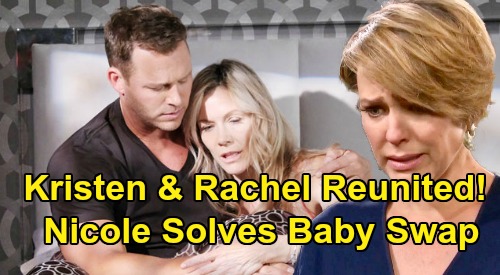 Days of Our Lives (DOOL) spoilers tease that Kristen DiMera (Stacy Haiduk) will try to focus on the future. DOOL fans know Kristen had a disturbing dream about her baby not too long ago. She struggled to shake the feeling that Rachel Isabella DiMera Black needed her somehow. Although Brady Black (Eric Martsolf) comforted Kristen during that crisis, he also gently encouraged her to move on.

Brady’s eager to make some new memories and concentrate on this fresh start with Kristen. Of course, it could be tough for Kristen to completely put the issue to rest. What happens if there are more dreams and bizarre feelings? Kristen may start to think something just isn’t right. That’s especially true since a key baby swap player is about to resurface.

Days of Our Lives spoilers say this storyline is about to rev up. Dr. Raynor (Victoria Platt) was paid off by Victor Kiriakis (John Aniston), so Victor and Xander Kiriakis (Paul Telfer) don’t expect to see her again. They feel confident Dr. Raynor’s involvement is buried and are far more wrapped up in all this Maggie Kiriakis (Suzanne Rogers) drama right now.

However, Days of Our Lives spoilers and updates say Dr. Raynor will head back to town on March 3. She was supposed to scram and steer clear of Salem for good, but something will bring Dr. Raynor home again. Will Dr. Raynor’s conscience be troubling her? Will Xander face a blackmail plot instead?

Regardless, Days spoilers say Xander will blast Dr. Raynor and that’ll give Nicole Walker (Arianne Zucker) a chance to eavesdrop. She’ll soon realize Dr. Raynor knows something that Xander would rather keep quiet.

Nicole has a nose for news, so you can bet she’ll do some digging. Whether Nicole confronts Xander or just investigates on her own, she’ll be a step closer to uncovering this DOOL baby switch.

Wouldn’t it be something if Kristen’s enemy were the one to reunite her with Rachel? Nicole and Kristen certainly aren’t fond of each other, but this baby needs to be with her true mother.

Sarah Horton (Linsey Godfrey) is taking great care of Mackenzie “Mickey” Horton, but this isn’t her daughter. Brady and Kristen deserve to know the truth, and Nicole could easily end up in a position to tell them.

That would mean devastating Sarah and Eric Brady (Greg Vaughan), but Nicole may be forced to do it. She knows what it’s like to lose a child and wouldn’t wish that on anyone, even Kristen.

Furthermore, Nicole’s kept too many secrets already. She can’t afford another epic screwup, particularly since both Eric and Brady are involved here. Nicole loves Eric and cares deeply for Brady as well.

Will Nicole be the one to reunite Kristen and Rachel? Will she give her enemy the ultimate gift by uncovering the truth? Don’t miss all our Days updates and news! CDL will have all the hottest Days of Our Lives spoilers as they come in.