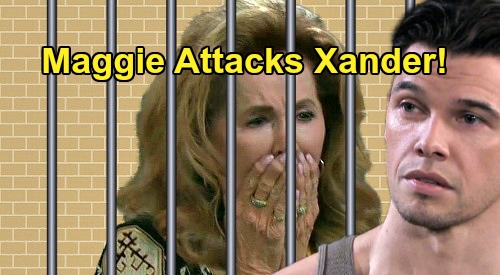 Days of Our Lives (DOOL) spoilers tease that Maggie Kiriakis (Suzanne Rogers) is still out of the loop when it comes to what went down with the baby swap. As DOOL viewers know, Maggie got a visit from Julie Williams (Susan Seaforth Hayes) at the prison, and Julie nearly spilled the whole baby swap story to Maggie. Julie got as far as telling Maggie that Sarah Horton (Linsey Godfrey) and Xander Kiriakis (Paul Telfer) didn’t get married, and then she was interrupted by Will Horton (Chandler Massey).

Will stopped short of telling Maggie about the baby switch, after having talked it over with Sonny Kiriakis (Freddie Smith) and realizing that it was better for Maggie not to know that her drunk driving ultimately killed her granddaughter.

So, for now, Maggie sits in prison knowing that there’s something that everyone’s not telling her about why Sarah and Xander didn’t get married. It’s a real mess.

Well, it looks like Maggie is going to have to be told the whole story sooner than anyone wanted after all, and that’s due to Victor Kiriakis’ (John Aniston) stabbing.

As DOOL viewers know, Kristen DiMera (Stacy Haiduk) has just stabbed Victor in the abdomen/chest area, and things aren’t looking great for him. The good news is that it looks like Victor will pull through and wake up after his ordeal.

But still, Maggie’s going to have to be told about Victor, and then she’s going to have a million questions about why Kristen would want to stab him in the first place. Everything’s going to unravel, and it appears that Xander may be the person to finally tell Maggie everything about the wedding fiasco, the baby switch, and Victor’s stabbing.

DOOL spoilers say that on Tuesday, May 5th, Xander will break devastating news to Maggie. Now this could be about Victor’s stabbing, the baby switch, her granddaughter’s death, or all of the above.

Whatever it is, it will be enough for Maggie to haul off and slap Xander on Wednesday, May 6th, so it looks like she’s going to learn about his role in the baby switch, and Xander will probably be attempting to tell Maggie that he was trying to protect her when she slaps him.

Of course, Maggie is going to be beside herself over hearing that Victor nearly died, but she’ll also surely be furious with him for perpetrating the baby switch in the first place.

We just might see a major Maggie meltdown right there in prison, and we can’t blame her for that. After all, she’ll have found out that her decision to drive drunk set in motion a terrible chain of events that hurt her daughter Sarah terribly.

We’ll see what happens from here, but it looks like Xander’s going to get some harsh words from Maggie as she tries to process everything that he’s just told her. Do you think that Maggie and Xander will ever be on good terms again after all this? Stick with the NBC soap and keep CDL bookmarked for the hot new Days of Our Lives news and spoilers.