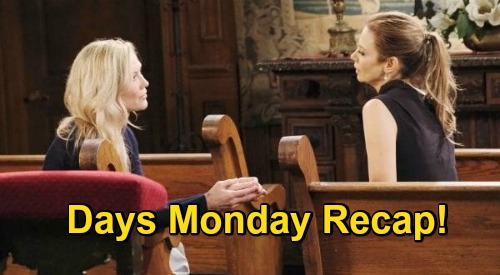 Days of Our Lives (DOOL) spoilers recap for Monday, November 16, reveal that Lani Price-Grant (Sal Stowers) demanded that Brady Black (Eric Martsolf) tell him about the secret that Eli Grant (Lamon Archey) is keeping from her.

Brady balked, but Lani whipped out the recording of Abe Carver (James Reynolds) and Eli talking from back at the pub, and then Brady told Lani the truth.

Brady said that Melinda Trask (Tina Huang) had blackmailed Eli into getting Kristen DiMera’s (Stacy Haiduk) confession on tape, and that Eli then persuaded Kristen to confess to Trask. Lani was horrified as she realized that Kristen had sacrificed her family for Lani’s family.

At Steve Johnson (Stephen Nichols) and Kayla Brady’s (Mary Beth Evans) apartment, Steve answered the door where Ava Vitali (Tamara Braun) had stood just a moment before, but no one was there.

Shortly thereafter, Kayla waked in, and Steve shared that Trask wasn’t going to file charges against Tripp Dalton (Lucas Adam) here in the US.

Kayla fumed, saying that she did four DNA tests, and that Steve had a blind spot on this case because Tripp is his son. Steve fired back that he thought that Kayla had a blind spot because Ava was Tripp’s mother. Kayla wasn’t amused.

At Statesville, Marlena Evans (Deidre Hall) visited with Kristen, comforting her over her last visit with Rachel Black. Marlena disagreed when Kristen said that she wouldn’t ever let Brady bring Rachel there again, and eventually Kristen came around and said that she still wanted to see her baby daughter.

After Marlena left, Ava walked into the visiting room, shocking Kristen. Ava explained that she didn’t perish in the Nashville warehouse explosion, and that she had rescued herself and left the country.

Together, Ava and Kristen reminisced about when they first met in 2015 in the convent in Italy, after Kristen had been pushed out of the tower by Marlena.

Kristen and Ava established that they had become fast friends after meeting, and that Kristen had encouraged Ava to return to Salem back in 2015 to reclaim Steve.

Kristen thought that Ava must be back in Salem to try again with Steve, but Ava said she was here for other reasons. Kristen vowed not to tell anyone that Ava was alive and in town, and Ava left.

At Nicole Brady’s (Arianne Zucker) apartment, Tripp asked Allie Horton (Lindsay Arnold) if he could come in and explain what happened on the night of the alleged rape.

Tripp walked through his side of the story, and Allie brought up the fact that Tripp held a scalpel to Kayla’s neck at one point. Tripp explained that he did that because he thought Kayla killed his mother.

Tripp went on, saying that Kayla forgave him and that they had a good relationship until the rape allegation arose. “Now she thinks I’m a rapist,” Tripp lamented. Tripp said that he was truly sorry for what happened to Allie, but that he did not do it. Allie seemed moved by this.

After Tripp left, Marlena stopped by to see Allie, saying that she was behind Allie 100% no matter what she chose to do about pressing charges in London. Later, Allie was alone and called Trask. “I’ve made a decision on whether to move forward with my case,” Allie said.

Tripp was horrified, and he realized that this is why Kayla believed that he was capable of raping someone – because Ava had.

Tripp took off, and Steve was upset that Tripp had heard the ugly truth about Ava. Kayla argued that Tripp was a grown man and that he couldn’t be sheltered from what Ava had done.

Kayla also insisted that there was irrefutable evidence that Tripp was guilty of Allie’s rape, and that he needed to answer for it.

At Julie’s Place, Julie Williams (Susan Seaforth Hayes) wondered what was troubling Eli, and she assumed that Eli must be worried about the babies’ health.

Eli didn’t tell Julie what was really bothering him, and she reassured him that everything would be fine and that he and Lani would have all the happiness in the world. Later, Julie talked briefly with Abe Carver (James Reynolds), saying that she was excited about Lani’s upcoming baby shower.

At Lani and Eli’s apartment, Eli returned home to find a somber-looking Lani waiting for him. Eli mentioned that he and Julie got the baby shower plans going, and Lani said that there would be no baby shower. “I know what you did to Kristen,” Lani fumed.

Meanwhile, at the Salem Inn, Marlena visited with Brady, saying that she got Kristen to agree to keep seeing Rachel. Brady was grateful, and he asked Marlena to watch Rachel while he went to Statesville to see Kristen.

Once there, Brady greeted Kristen, then he asked who visited Kristen right before him – the woman. Kristen looked unsure of what to say.

Finally, in the park, Tripp sat unhappily with his head in his hands. Ava walked up behind him and realized that this was Tripp. Ava walked up and almost touched Tripp’s shoulder, but Tripp got up and walked away, not seeing his mother.

That was a great episode of Days of Our Lives – you won’t want to miss tomorrow’s episode, so stay tuned! Stick with the NBC soap and don’t forget to check CDL regularly so you don’t miss any of our Days of Our Lives spoilers, recaps, or news.