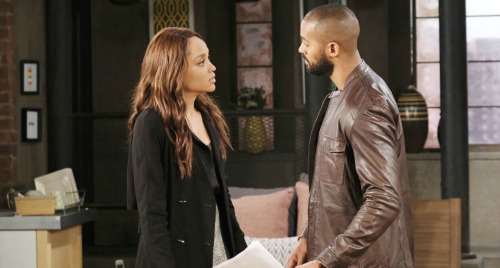 Days of Our Lives (DOOL) spoilers tease that more details are coming out about Evan Frears aka Christian Maddox (Brock Kelly) and his father, Orpheus (George DelHoyo). DOOL fans know Orpheus isn’t exactly a soft and cuddly guy. He’s not going to win any awards for being a great dad, but he does have a brilliant mind and the ability to help Evan right now.

As far as Evan and Orpheus’ relationship goes, they really don’t have much of one. Orpheus wasn’t present for Evan’s childhood and he wasn’t there for him as a teenager either. They only managed to connect somewhat once Evan was a young adult.

Days viewers will recall Evan making that desperate call shortly before kidnapping David Ridgeway (Caleb and Kyler Ends). He insisted he needed someone’s help and that someone was Orpheus.

If Evan had anybody else to turn to, he would have. Orpheus tends to be cold to his son, but Evan knows he can always count on his father when he’s in a real jam.

Of course, Evan is certainly one of those at the moment! His confession was thrown out, but he’s still facing charges for the murder of Jordan Ridgeway (Chrishell Stause).

Days of Our Lives spoilers say Evan will wonder what he should do next. At the motel where Orpheus has been keeping David, he’ll help Evan strategize about how to avoid landing behind bars and make sure he can raise his son.

Meanwhile, Rafe Hernandez (Galen Gering) will fret over David and the dangerous situation he might be in. He doesn’t know Orpheus is Evan’s father, but he’ll inevitably get updates on that revelation later.

First thing’s first though. Rafe will just want to find David! He’s been raising this child as his own and fully thinks of him as his son. Rafe was in the process of adopting David before all this blew up.

During the week of March 16-20, Days of Our Lives spoilers say Rafe will get a tip along with Lani Price (Sal Stowers) and Eli Grant (Lamon Archey). They’ll head to the motel with Rafe and hope they can help him pull off this bust.

Once Rafe bursts through the door with Eli and Lani, they’ll all be in for a big surprise. They’ll find Evan alone looking rather nonchalant. There’ll be no sign of David or Evan’s ally anywhere.

As you can imagine, Rafe will be awfully fed up at this point. The war will really be on! Rafe obviously isn’t going to just throw in the towel here, but it seems like Evan’s several steps ahead of the game. He might’ve even arranged that tip just to throw Rafe off the trail and give Orpheus a chance to change locations with David.

Whatever the case, Rafe will figure out how Orpheus fits in eventually. It looks like he’ll have to go head-to-head with this Days villain, so stay tuned. We’ll give you all the latest DOOL news as it rolls in. Stick with CDL for more Days of Our Lives spoilers, news and updates.