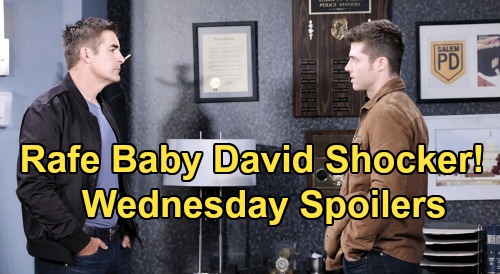 Days of Our Lives (DOOL) spoilers for Wednesday, March 18, tease that Hope Brady (Kristian Alfonso) will get some horrifying news. After Hope awakens from surgery, she’ll slowly regain her true sense of self. Hope will have plenty of questions about what happened, but Kayla Brady (Mary Beth Evans) may advise against information dump. It’s best to avoid overwhelming Hope with too many details at once.

However, Hope will at least get a couple shockers to start off. She’ll be stunned when she realizes Dr. Wilhelm Rolf (William Utay) transformed her into Princess Gina Von Amberg.

Of course, a far worse bombshell will come when Hope learns what she did under mind control. Hope will get updates on how she pushed Jennifer Deveraux (Melissa Reeves) off the bistro balcony and put her in a year-long coma.

Not only did Princess Gina rob Jennifer and her family of a year together, she could’ve killed Jenn! Even though that wasn’t Hope’s fault, she’ll still feel terrible.

Naturally, Hope will get more info in the coming episodes. We’ve barely scratched the surface of what Hope did during her stint as Princess Gina, so there’ll be other crushing blows to come.

Until then, Days of Our Lives spoilers say Rafe Hernandez (Galen Gering) will rush to the motel Evan Frears aka Christian Maddox (Brock Kelly) is staying at.

Rafe will barge in with Lani Price (Sal Stowers) and Eli Grant (Lamon Archey) thanks to the tip Lani just received. Unfortunately, Orpheus (George DelHoyo) and David Ridgeway (Caleb and Kyler Ends) will already have cleared out by then.

It turns out Evan will be all by himself – totally calm, cool and collected. Evan will once again stonewall Rafe about David, which will leave Rafe completely exasperated.

Days of Our Lives spoilers say Rafe will blow his top, but Evan will remain unfazed. Since Orpheus will be long gone with David, Evan will keep his secrets locked up tight for now.

Other Days spoilers say Clyde Weston (James Read) will have some explaining to do. He just recognized the name Christian Maddox, so Ben Weston’s (Robert Scott Wilson) wondering if Clyde knows the man who murdered Jordan Ridgeway (Chrishell Stause).

Clyde will confess that he accidentally led to Jordan meeting her killer – and it’s all because Orpheus was once Clyde’s cellmate. Clyde talked to Orpheus about his stepdaughter and heard about Orpheus’ son, so it seems Orpheus gave Evan updates.

Ben will grill Clyde about trying to have Jordan killed, but his dad insist that part was out of his hands. Clyde had no idea that Jordan would meet a grim fate, so he’ll be truly sorry about that.

It sounds like some great twists and turns are ahead in Salem. As other news comes in, don’t forget to stop by often for DOOL details. CDL will have all the hottest Days of Our Lives spoilers for you.