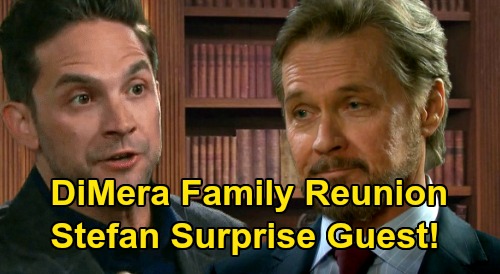 Days of Our Lives spoilers reveal Stefano DiMera (Stephen Nichols) will make another demand of his son. He instructs Chad DiMera (Billy Flynn) to organize a DiMera family reunion. We will be seeing a lot of familiar faces and with Brandon Barash reportedly returning in April 2020, will Stefan DiMera also be back? Days fans will learn his death wasn’t as it appeared.

DOOL spoilers reveal that Stefano is just getting started when it comes to having a brainwashed Chad do his bidding. He is determined to get back everything that has been taken from him, as well as the DiMera family. We already know that Chad has been ordered to kill Gabi Hernandez (Camila Banus) and Kate Roberts (Lauren Koslow), but that’s not all.

Chad will also be told to organize a DiMera family reunion, which might feature the return of some memorable, as well as a few forgotten faces.

Stefano’s goal is to take back his empire and once again reign over Salem. At one time, he was untouchable and his family was to be feared. They had unlimited power, control, money and resources. Stefano plans on having all of that again, and he’s using his own son to get that accomplished.

Now, this isn’t the first time that Stefano has brainwashed one of his children, but it’s a bit different with Chad. This is because deep inside, he really does want to please his father. With that being said, Chad will go through an internal war with himself, but it seems that at least for the time being, Stefano will get what he wants.

Days of Our Lives spoilers reveal that Brandon Barash is returning soon and Days buzz is that we could see him as early as April 2020. However, Dr. Wilhelm Rolf (William Utay) couldn’t give Stefan DiMera the resurrection injection because the man was brain-dead. So, how exactly will Barash return and as which character?

A lookalike or secret twin brother? Perhaps Stefan was cloned or is it possible that his death isn’t exactly as it appeared on-screen? Could we be in for a real shock when Stefan rolls back into Salem, only to discover that the person who died was someone else?

There are a lot of possibilities here, and with Ron Carlivati as head writer, nothing is impossible. CDL reported a theory that Ciara Brady (Victoria Konefal) and Ben Weston (Robert Scott Wilson) will be the ones to discover Stefan upon his return.

Days of Our Lives Spoilers: DiMera Family Fights Back

Why would Stefano want a huge DiMera family reunion? The man isn’t exactly interested in seeing everyone he’s related to. No, he’s interested in one thing and that is getting his power back. The DiMeras have always been stronger standing united as a family. You better believe that Stefano not only wants to get back his empire, but he will be determined to make Salem suffer.

The question is, is the town of Salem really prepared for an all-out war with the entire DiMera family? We will have to wait and find out how this story develops.

Be sure to catch up on everything happening with DOOL right now. Come back here to CDL often for Days of Our Lives spoilers, news, and updates!