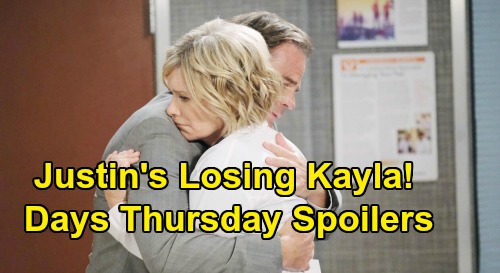 Days of Our Lives (DOOL) spoilers for Thursday, April 9, tease that Justin Kiriakis (Wally Kurth) will open up to Jennifer Deveraux (Melissa Reeves). Now that Justin knows Steve Johnson (Stephen Nichols) made it through the surgery, he also knows Kayla Brady (Mary Beth Evans) could be one step closer to a “Stayla” reunion. That’s a hard thing for Justin to accept since he fell hard and loves Kayla so much.

Justin’s feeling selfish for hoping this reunion doesn’t pan out, so he’ll have a lot to unload on Jennifer. Days of Our Lives spoilers say Justin will share his fear of losing Kayla to Steve.

It would rip Justin’s heart out since he already lost Adrienne Kiriakis (Judi Evans), but Kayla’s happiness matters to Justin, too. It’s a complicated situation, but Jennifer will offer some good advice.

At the hospital, Kayla will sit by Steve’s bedside and cling to hope. DOOL fans know Steve’s procedure brought a scare since Dr. Wilhelm Rolf (William Utay) rigged the chip to self-destruct.

Kayla had to cut off the power supply, which meant cutting into Steve’s brain and opening up the potential for damage. Steve could lose all his memories and awaken as a blank slate.

Of course, Kayla’s hoping that won’t happen! Days of Our Lives spoilers say Kayla will count on Steve to come back to her. Kayla doesn’t know for sure what she’ll do about her love life, but she knows she wants Steve back to normal. Steve needs to remember his kids along with his life in Salem, so Kayla will hope for the best.

Days spoilers say Steve will eventually wake up, but he won’t quite be himself on Friday. It seems Steve will retain some memories, but his love for Kayla will be gone at first.

In the meantime, Eric Brady (Greg Vaughan) and Nicole Walker (Arianne Zucker) will stop Sarah Horton (Linsey Godfrey) before she ties the knot. There’s something Sarah needs to know first – and DOOL fans know what it is!

Mackenzie “Mickey” Horton is really Rachel DiMera Black, so that’s what Sarah will find out soon enough. The baby swap bomb’s about to drop, which means Sarah’s world will come crumbling down.

Over with Xander Kiriakis (Paul Telfer), he’ll have a horrible nightmare and wake up with more concerns than ever. Xander will be terrified that Nicole and Eric may already know the truth about Mickey.

Sarah and Xander’s nuptials won’t go as planned, so we’ll give you updates as other DOOL news rolls in. You can bet some hot drama’s ahead! CDL will have even more Days of Our Lives spoilers, news and updates to pass along, so be sure to stop be frequently.