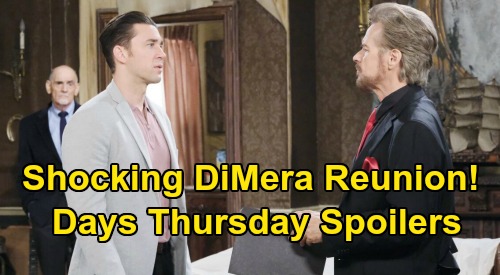 Days of Our Lives (DOOL) spoilers for Thursday, March 19, tease that Stefano DiMera aka Steve Johnson (Stephen Nichols) will have a new mission for his son. Chad DiMera (Billy Flynn) will listen to Stefano’s latest orders, which will involve putting together a DiMera family reunion. Stefano will want his loved ones around him – and there’s a good reason why.

It seems likely Stefano intends to round up wedding guests since he’ll plan to marry Marlena Evans (Deidre Hall) soon. Whatever the case, Days spoilers say Chad will obey and get started on this family reunion goal.

Tony DiMera (Thaao Penghlis) and Kristen DiMera (Stacy Haiduk) will get invitations before long, but Kristen will do some reminiscing in the meantime.

DOOL fans know Kristen and Brady Black (Eric Martsolf) recently recalled some details about their daughter. They took a few minutes to close their eyes and consciously remember the fleeting moments they had with Rachel DiMera Black.

Since that helped Kristen cope with her pain, she’ll once again remember and lean on Brady this Thursday. Brady will do the same, so they’ll bond in their sorrow.

Other Days of Our Lives spoilers say Xander Kiriakis (Paul Telfer) will pass along a warning. As Xander grows increasingly concerned about the threat Nicole Walker (Arianne Zucker) poses, he’ll let Victor Kiriakis (John Aniston) know what’s going on. Xander will admit Nicole’s onto them, which means this baby swap scheme could be exposed.

Of course, Victor will want Xander to step up and do whatever it takes to stop Nicole. He’ll expect Xander to play as dirty as he has to – and Xander should agree that’s what must done.

Over with Nicole, Days of Our Lives spoilers say a plan will form. Nicole’s convinced Rachel is actually Mackenzie “Mickey” Horton, so now she just has to prove it. A DNA test is the only way Nicole can know anything for sure.

Days spoilers say Nicole will need some samples as part of this plan. To get Kristen’s, it looks like Nicole will end up starting a catfight. That’ll give Nicole the perfect opportunity for hair-pulling once Friday rolls around.

As other DOOL updates emerge, we’ll have all the latest news to pass along. Are you looking forward to the baby switch reveal? Some twists and turns will cause some roadblocks, but this secret has to come out eventually! CDL’s your hotspot for Days of Our Lives spoilers, news and updates.