Days of Our Lives Spoilers: Wally Kurth Not Back On Contract At DOOL – Justin Kiriakis Portrayer Sets Record Straight

BY hellodrdavis on March 5, 2020 | Comments: one comment
Related : Days of Our Lives, Soap Opera, Spoiler, Television 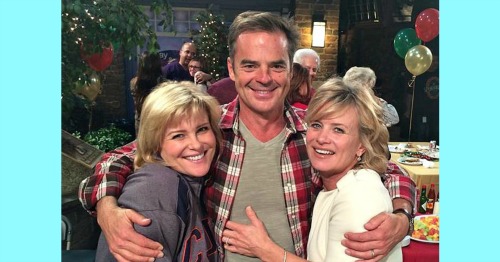 Days of Our Lives (DOOL) spoilers has some news to pass on about a popular DOOL star. Wally Kurth, who portrays Justin Kiriakis on the NBC soap as well as Ned Quartermaine on General Hospital, recently shared an important update with his social media followers.

The update came in response to reports that Wally was back on contract at Days of Our Lives. To clarify, Wally tweeted: “For the record, and because I believe in truth in journalism, I am actually not back on contract. But I am continuing to work on @nbcdays. Happily.”

That seems to set the record straight about that, and it’s good to know that while Wally isn’t on contract, he’s continuing on at Days of Our Lives. You might know that three other actors have recently confirmed their exits from the show.

Chandler Massey (Will Horton), Freddie Smith (Sonny Kiriakis), and Galen Gering (Rafe Hernandez) will all be exiting the show in the months to come.

Of course, at the moment, Wally’s character Justin is currently embroiled in a major storyline on DOOL. His love Kayla Brady (Mary Beth Evans) is being held hostage by Stefano DiMera aka Steve Johnson (Stephen Nichols), and he’s getting desperate to get her back.

It also seems that Justin could have some big drama coming in the months ahead as Judi Evans, who portrayed Justin’s now-deceased wife Adrienne Kiriakis, will be returning to the show.

Of course, whether she’s returning as a back-from-the-dead version of Adrienne or as Bonnie Lockhart remains to be seen. But if she does come back as Adrienne, then that will likely give Wally’s character more material.

One thing’s for sure – Wally’s fans are happy to hear that he’s continuing on with DOOL. In response to Wally’s tweet, one fan replied: “Glad to hear it – Contract or not, go glad you’re still on @nbcdays!!” And another said: “Glad you’re there…and glad you’re happy…and wish you were on contract.”

Justin is definitely a fan-favorite character and it’s been great to hear that Wally is continuing to work at DOOL and that he’s happy here. Of course, he’s pretty popular as Ned Quartermaine on GH as well, and there are plenty of fans out there who would love to see him keep both characters alive for the foreseeable future.

We’ll see what the future holds for Justin on DOOL and for Ned on GH, but for now Wally’s news seems pretty positive! Stay tuned to Days of Our Lives and don’t forget to check CDL frequently for the latest DOOL spoilers, updates, and news.

For the record, and because I believe in truth in journalism, I am actually not back on contract. But I am continuing to work on @nbcdays . Happily. https://t.co/HWegHslf9B