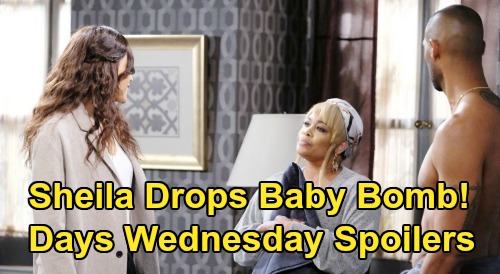 Days of Our Lives (DOOL) spoilers for Wednesday, April 1, tease that some big shockers are on the way. DOOL’s set to deliver an April Fools’ Days show that’s packed with humor, returns and twists. There are sure to be lots of fun moments in this episode, so we’ve got a great preview.

For starters, Days spoilers say Nicole Walker (Arianne Zucker) will get a huge surprise. Daniel Jonas (Shawn Christian) will knock on Nicole’s door, so she’ll obviously be stunned. Since Daniel’s supposed to be dead, Nicole will certainly have some questions!

No matter what crazy excuse Daniel offers, the point is he’ll be back and eager to pick up where they left off. Daniel was engaged to Nicole at the time of his death, so he’ll want to get their wedding plans back on track. It looks like Eric Brady (Greg Vaughan) will give his blessing before Abe Carver (James Reynolds) officiates this impromptu living room ceremony.

However, DOOL spoilers say the nuptials will take a wrong turn. We should note that Daniel’s personality won’t be like it used to be in this April Fools’ Day episode. Daniel will be more of a stereotypical beach dude. He’ll keep calling Nicole “babe” and making her uncomfortable throughout this weird fantasy.

Daniel will eventually reveal something that riles Nicole up, so she’ll attack him and have to be pulled back by Eric. Days of Our Lives spoilers say Abe will be caught in the middle of the mayhem. It definitely sounds like one wild wedding!

Meanwhile, Eli Grant (Lamon Archey) and Lani Price (Sal Stowers) will get a shock of their own. Days spoilers say Sheila Watkins (Tionne “T-Boz” Watkins) will arrive out of the blue – and she’ll bring a special delivery along with her. Sheila will have a baby, so she may lead Eli to believe this child is his.

However, we should note that Daniel will have his arm around Sheila in the town square at one point. Perhaps Sheila’s baby will actually belong to Daniel. His relationship with Sheila might be part of why Nicole flies into a rage and dumps him at the living room “altar.” It’s easy to imagine Daniel pushing for sister wives or something along those lines – at least in a wacky April Fools’ Day episode.

Days of Our Lives spoilers say Sonny will blow his top after Leo lands in bed with Will. Some explosive scenes are coming up thanks to this cheating bombshell. Across town, Clyde Weston (James Read) will show up to see Ben Weston (Robert Scott Wilson) after escaping from Statesville. Clyde will be looking for help, but he’ll manage to push Ciara Brady’s (Victoria Konefal) buttons.

Ben will get in on the action as the tension escalates. It won’t be long until Clyde’s knocked out with a bottle, so he’ll end up with a bloody gash on his head. Ben and Ciara may worry that they’ve got another murder on their hands! That’d be bad news for newly released Ben, so he may have to make some updates to his plans with Ciara.

Of course, the end of the episode will bring an April Fools’ Day message. Days spoilers confirm none of this is real, so just sit back and enjoy all the entertaining fantasies. Don’t forget to drop by CDL frequently for other Days of Our Lives spoilers, news and updates.