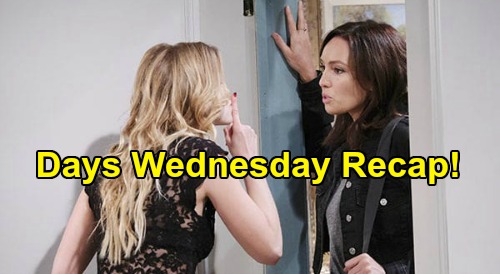 Days of Our Lives (DOOL) spoilers recap for Wednesday, June 17, reveal that Jennifer Deveraux (Melissa Reeves) came home to the DiMera mansion where Jack Deveraux (Matthew Ashford) had a romantic dinner setup arranged with dim lights and candles. Jack wanted a special night just for the two of them, and he proceeded to present Jennifer with her dinner, which their grandkids had helped make.

Turns out, the “dinner” was a concoction of popcorn, potato chips, and candy. Jack and Jennifer tried to eat it, but it was awful, yet they continued on saying that if their grand babies made it, then they were going to eat it. Jack and Jennifer got through about half of the concoction, then took a selfie of themselves eating it to show the kids.

Jennifer tried to bring up the situation with Justin Kiriakis (Wally Kurth), Kayla Brady (Mary Beth Evans), and Steve Johnson (Stephen Nichols), but Jack insisted that tonight was about them and only them. Jennifer and Jack ended up having a real dinner next, with a lot of talk about making new memories and going forward with their lives.

Jack and Jennifer talked about having a real honeymoon, but then decided against it, since they wanted to just be together and enjoy making new memories. But they did need to cover up Stefano DiMera’s (Joseph Mascolo) portrait, as they felt it was watching them while they were kissing and enjoying their evening.

In town square, Lani Price (Sal Stowers) and Eli Grant (Lamon Archey) sat at a table and watched the Salem Inn wondering who Jake Lambert (Brandon Barash) had gone in there to visit. Eli and Lani surmised that Jake knew more than he was saying.

Meanwhile, inside the Salem Inn, Ciara Brady (Victoria Konefal) and Jake waited for word from Ben Weston (Robert Scott Wilson), who was at Bayview with Marlena Evans (Deidre Hall). Ciara urged an impatient Jake to just sit tight for now.

At the warehouse, Gabi DiMera (Camila Banus) tried to get information from the burly mob guy about what he wanted from Jake. Gabi then tried to seduce her way out of being tied up, promising the guy a good time. The guy untied Gabi, and she promptly kneed him in the groin, and he went down on the ground, but she couldn’t get out of the warehouse, and so she was back at square one.

At Bayview, Marlena told Ben that Gwen (Emily O’Brien) checked herself out this morning. Ben went to leave, and Marlena said that perhaps he should go to the police about Gabi. Ben thought that maybe Marlena was right.

At the townhouse, John Black (Drake Hogestyn) talked with Claire Brady (Olivia Rose Keegan) about trust and secrecy. John stepped into the kitchen to make some tea for Claire, and Gwen showed up at the penthouse.

Gwen told Claire that she left Bayview after she overheard that someone had called there looking for her. Claire shooed Gwen into her bedroom quickly, then John returned with Claire’s tea.

Claire bolted into her room, then Marlena showed up fresh back from Bayview and filled John in on not being able to find Gwen. In Claire’s room, Gwen griped at Claire for ratting her out, and Claire said that she didn’t have a choice and that someone’s life was at stake.

Claire explained that dangerous people want what Gwen has of Jake’s. Gwen then pulled out an expensive-looking book. “I’m guessing this is what they want,” Gwen said.

Gwen shared with Claire that Jake was mixed up with the mob, and that there were names and numbers written in the margins of the book. Claire said that they needed to give Jake the book back, and Gwen balked, saying that the book must be pretty valuable.

Claire begged Gwen to let her get her grandparents involved. Gwen said that she might just leave through the window and take the book with her.

Meanwhile, Marlena and John enjoyed a drink in the living room together. John expressed concern that Claire might be obsessed with making amends to Ciara. Marlena thought that Claire had a good sense of right and wrong.

Back at the Salem Inn, Ben returned to regroup with Jake and Ciara. Ben relayed that Gwen was gone, much to Jake’s dismay. Ben and Ciara thought that it might be time to get the cops involved, and Ciara demanded to know what Gwen took from him that the mob is so interested in.

Jake said that it was a leather-bound edition of Crime & Punishment with writing in the margins that is very valuable to the mob.

Jake said that he took the book as an insurance policy and always intended to give it back. Suddenly, Jake’s phone rang, and it was the mob guy saying that Gabi’s time has run out. Gabi yelled into the phone as proof of life for Jake, and Jake lied and said that he had the book.

The mob guy said he’d text Jake the address and to meet in 1 hour to make the exchange. Ben and Ciara were incredulous that Jake lied and bluffed, but Ciara suddenly had an idea.

Back in town square, Lani returned to Eli saying that she talked to the Salem Inn clerk, and that both Jake and Ben went to Ben and Ciara’s room. Lani then got nauseated and pulled out some goldfish crackers to settle her stomach.

A few minutes later, Eli and Lani spotted Ciara, Ben, and Jake come out of the Salem Inn, and they followed the trio.

Ciara, Ben, and Jake walked into the Kiriakis mansion, where Ciara went and retrieved a book from some other room – a leather-bound copy of Crime & Punishment that Jake said looked “close enough” to the book he stole from the mob.

“Will it fool the thug that’s holding Gabi?” Ben asked. Jake scribbled some names and numbers in the margins.

Outside, Lani and Eli showed up at the Kiriakis mansion door wondering why Ciara would bring Ben and Jake there. Lani got a wave of nausea and Eli handed her some goldfish crackers.

Finally, back at the warehouse, the mob guy sent Jake a text with the meeting location. The guy said that he hoped Jake was smart and not a tease like Gabi. “If he doesn’t deliver, I’ll kill you both,” the mob guy told Gabi.

There’s definitely a lot going on right now on Days of Our Lives, so stay tuned! We’ll give you updates as DOOL news comes in. Stick with the NBC soap and don’t forget to keep CDL bookmarked for all the latest Days of Our Lives news, spoilers, and daily recaps.