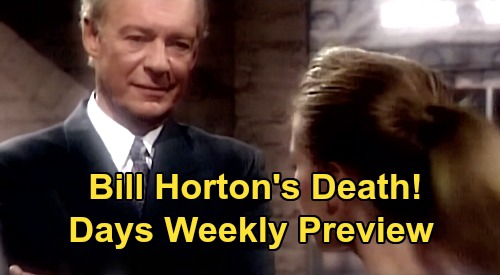 Days of Our Lives (DOOL) spoilers weekly preview teases that we’re in for an emotional week on the NBC soap. The new DOOL promo for the week of February 17th is about two heavy storylines – one concerning a man who doesn’t remember who he is, and one concerning the loss of a prominent member of the Horton family. There’s a lot to cover in this promo, so let’s get right into it!

First off, the action during the week of February 17th will largely center around Stefano DiMera aka Steve Johnson’s (Stephen Nichols) big identity reveal as Stefano DiMera.

As DOOL viewers know, Kayla is currently with the man she believes is Steve in a warehouse hiding him out, and since Stefano has sabotaged her phone, she doesn’t know that she’s really dealing with Stefano himself.

Well, according to Days of Our Lives spoilers, Stefano will finally get annoyed enough with Kayla that he’ll reveal the truth about who he really is. He’s shown in the promo ripping off his eye patch and declaring that “I am Stefano DiMera!”

Kayla looks absolutely stunned, and it appears that it will take some convincing on Stefano’s part to convince her that he’s telling the truth.

But as Kayla thinks back on all of the oddities in Steve’s behavior in the past, including how Steve never returned for his sister Adrienne Kiriakis’ (Judi Evans) funeral and how he just abruptly dropped off the face of the earth, she’ll start to realize the truth.

And certainly, seeing that “Steve” now has two eyes will be a jolt for her as well. Then Stefano will mention Dr. Willhelm Rolf (William Utay), and things will come together for Kayla.

The promo shows Kayla doing her best to get through to Steve, as she tells him that she knows he’s “in there” somewhere. Ultimately, Days of Our Lives spoilers say that Kayla will try to escape, but Stevano will restrain her, so it looks like she’ll end up being his hostage, at least for a while.

The good news here is that Roman Brady (Josh Taylor), John Black (Drake Hogestyn), Marlena Evans (Deidre Hall), and the authorities are all searching for her, and they know that she’ll likely in grave danger from the Phoenix himself.

Next, the promo turns to a very sad development on DOOL. Longtime viewers of the show will remember Bill Horton (last played by John H. Martin), who is the father of Jennifer Deveraux (Melissa Reeves) and Lucas Horton (Brian Dattilo) and the grandfather of JJ Deveraux (Casey Moss) and Abigail DiMera (Kate Mansi), among others.

Bill was last seen in 2010 when he appeared for his mother Alice Horton’s (Frances Reid) final days. During the week of February 17, Jennifer will receive word that her father has died in Africa, where he was residing.

The promo shows her tearfully telling JJ and Abigail, along with Doug Williams (Bill Hayes) and Julie Williams (Susan Seaforth Hayes) that Bill has passed away. It will be a sad time for family, most of whom will pack up and head to Africa for the funeral. CDL reported that JJ’s final Days airdate takes place when the family leaves for Africa.

The loss of Bill will provide a segue into a special episode honoring Doug. During the episode, he’ll reminisce about earlier years, many of which will no doubt be with Bill, and it will commemorate Doug’s 50 years in Salem. As for Bill’s immediate family, they’ll be heartbroken but determined to support each other.

Interestingly, the weekly preview does show a strange moment between Chad DiMera (Billy Flynn) and Abigail, as she tells him through tears that she doesn’t want him to go with her to the funeral in Africa.

We’ll see what that’s about, but although it appears Abigail is abanding Chad she might simply want him to stay home with the kids, and/or keep an eye on the ongoing situation with Gabi Hernandez (Camila Banus). At any rate, it doesn’t appear as if Chad will be making the trip.

It looks like it will be an eventful week in Salem, so stay tuned so you don’t miss a beat. Stick with Days of Our Lives and check back with CDL for all of your DOOL updates, news, and spoilers.