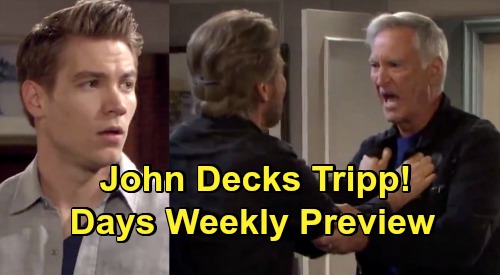 Days of Our Lives (DOOL) spoilers preview teases that viewers are in for an exciting week, October 12-16, on the NBC soap. The new Days of Our Lives promo for the week of October 12 is out, and it’s all about a series of brawls or near brawls happening on four big storyline fronts.

First off, it looks like Chad DiMera (Billy Flynn) will get under Jake Lambert’s (Brandon Barash) skin. Jake is shown getting in Chad’s face and blustering about how they “handle these things” in Philly.

Chad doesn’t look too concerned about the whole thing, as he just stands by calmly and asks Jake if this is a threat. Kate DiMera (Lauren Koslow) is standing by as well, so this probably has to do with DiMera business.

Jake may still be peeved that Chad won’t include him in DiMera business matters, even though Jake basically made the big Collins deal happen with his own brand of charm.

In another matter, it looks like a physical fight could bust out between Tripp Dalton (Lucas Adams) and newcomer Charlie Gale (Mike C. Manning). It appears that Tripp will want to talk with Claire Brady (Isabel Durant) outside of the Brady Pub, but Charlie won’t be having it. 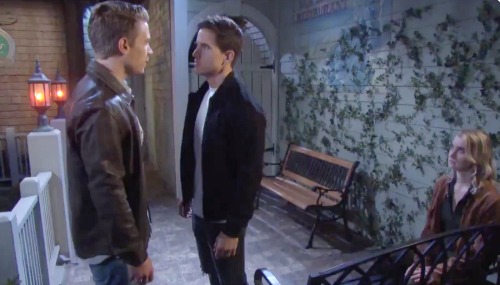 Charlie will probably know all about the rape allegation against Tripp, or at least he’ll know that Claire doesn’t want to have anything to do with Tripp, and that will be enough.

Tripp and Charlie are shown dangerously face-to-face, with Tripp insisting that this is none of Charlie’s business. “I’m making it my business,” Charlie says ominously, all while Claire watches from a nearby park bench.

Charlie may score some big points in keeping Tripp away from Claire right now, and we might see a protective, mean side to Charlie here.

Next, over at the Kiriakis mansion, it looks like Philip Kiriakis (Jay Kenneth Johnson) will get to know Sarah Horton (Linsey Godfrey), and Xander Kiriakis (Paul Telfer) isn’t going to be having it.

From the looks of things, Xander will happen upon Sarah talking with Philip, as Sarah is touching Philip’s arm and Philip is telling Sarah that she’s a beautiful woman.

As you can imagine, that’s not going to go over well with Xander, and he’s shown rushing over to Philip and grabbing him by the scruff of the neck. “Oh, is that right?” Xander blusters. 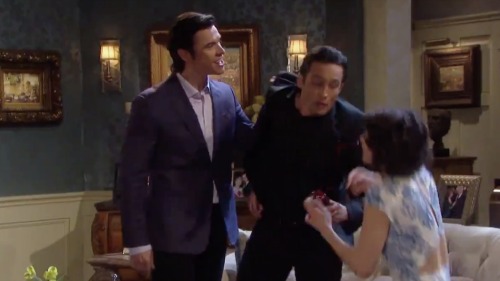 Of course, Sarah will probably insist that nothing untoward was going on here, and Xander will probably come out looking like the bad guy, even though Philip may have an angle here of his own.

Finally, Tripp and Steve Johnson (Stephen Nichols) will find themselves at the receiving end of one of John Black’s (Drake Hogestyn) angry tirades. John, who will be out of the hospital, will apparently head right on over to Steve and Kayla Brady’s (Mary Beth Evans) place when he learns about Allie Horton’s (Lindsay Arnold) rape allegation against Tripp.

Of course, John would be angry under any circumstance at the thought of Allie being victimized in this way, but since John is still suffering anger management issues as a result fo his brain aneurysm, the results will be explosive.

John is shown rushing into Steve and Kayla’s place and yelling, “This dirt bag assaulted my granddaughter!” as he punches Tripp big time.

Suffice it to say, this isn’t going to do anything good to Steve and John’s friendship. In fact, Days of Our Lives viewers can probably expect a major rift between the buddies over this, especially after John gets physical with Tripp.

It looks like we’re in for an exciting week, so stay tuned! We’ll give you updates as more news comes in. Stick with the NBC soap and don’t forget to check back with CDL for the latest Days of Our Lives spoilers, daily episode recaps, and news.