Days of Our Lives Spoilers: What Does Gabi’s Exit Mean for Jake Lambert aka Stefan DiMera – ‘Stabi’ Powercouple’s Future? 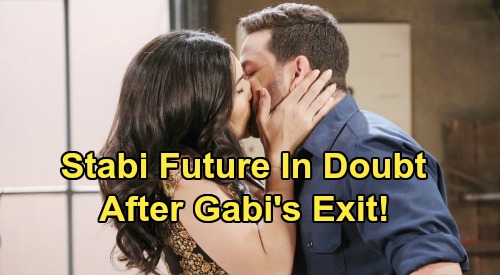 Days of Our Lives (DOOL) reveal that Camila Banus (Gabi DiMera) recently shocked the soap world with a big announcement. On Instagram, Banus posted some new photos of herself along with a message to the film and television industry. The DOOL star insisted she was an “actor available for work” and included the hashtag “#hireme” as part of the post.

After the news spread online, one hopeful fan tried to argue that perhaps Banus meant she was available for work because of the COVID-19 aka coronavirus crisis. Production has been suspended at Days, so the fan suggested this is why Banus was available to work and argued that it didn’t necessarily mean she was leaving the show. Banus responded to the tweet with four clapping hand sign emojis.

So why would Banus be trying to land another job if she’s not leaving the show? Furthermore, it’d be easy to just say she’s not leaving and be done with it. Banus could’ve made a definitive statement since her post created the confusion, but she’s choosing not to do that. It seems like Banus wanted to create some buzz and get people talking.

This could mean Banus is still open to negotiating after Days is back up and running. Sometimes getting fans riled can help nudge soaps into locking in a deal. It’s also possible Banus is now off contract and will still be able to pick up other jobs after the shutdown ends. That would be an explanation for Banus remaining on the show and still looking for work.

Regardless, Days of Our Lives spoilers say Gabi will almost certainly exit in some fashion this September. It could be a situation where Gabi’s only gone for a month or two. Then again, it could be longer if a deal wasn’t reached. Three different Days insiders insist that Gabi will end up offscreen – at least for a while.

What does that mean for Jake Lambert (Brandon Barash), Stefan DiMera (Brandon Barash) or whatever character Barash is really playing? Will Jake or Stefan stay in Salem if Gabi’s exit sticks? That’s tough to say. We know Nadia Bjorlin (Chloe Lane) is back on the show, so Chloe could be another love interest for Stefan or Jake if need be.

However, Barash isn’t on contract according to DOOL’s latest credits. It’ll be interesting to see how Days decides to handle this if one half of “Stabi” is gone. Things should become clearer once production resumes at Days of Our Lives and the cast starts making social media posts from the set again.

UPDATE: It appears Camila Banus is backing away from implying she is leaving Days and actually looking for a new job – we’ll see if Gabi is still on the show come September. In a Twitter post Banus is acting as if all is normal with her and Days – without directly addressing the issue.

I have been self taping auditions since 2005…ummm why is everyone having a cow ? pic.twitter.com/hkorv5fQdN