Days of Our Lives Spoilers: Will Ciara Be Ben’s Pregnant Bride – A ‘Cin Bun’ In The Oven?

BY hellodrdavis on May 17, 2020 | Comments: Leave Comments
Related : Days of Our Lives, Soap Opera, Spoiler, Television 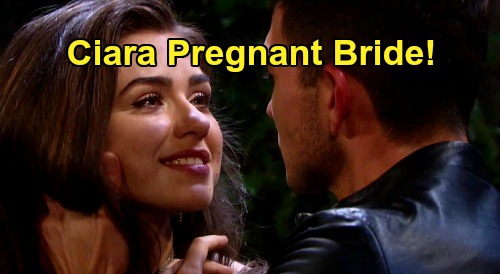 Days of Our Lives (DOOL) spoilers tease that Ciara Brady (Victoria Konefal) and Ben Weston (Robert Scott Wilson) will be embarking on wedding plans right away. Right after Ciara told her mom Hope Brady (Kristian Alfonso) about her engagement to Ben, she seemed gung-ho on planning her big day. Of course, it took Hope a few minutes to warm up to the idea of Ciara marrying Ben, but once she got over her initial shock, she gave Ciara her blessing.

Ciara will even have a big request for Julie Williams (Susan Seaforth Hayes) soon, so it looks like Julie could wind up officiating the big event…that is, if she agrees to do so.

DOOL viewers will remember that Julie has not been on board with Ciara’s relationship with Ben from the get-go, and she even refused to give Ben a dinner reservation on his very first date with Ciara. But something tells us that Julie might reconsider her Ben stance now that Hope has given her blessing for the wedding.

Of course, Ben and Ciara’s wedding could be a pretty spectacular event in Salem. It just might get a lot of press, given Ben’s history and Ciara’s family’s stature in the town, but might there be more of a surprise in store for the bride and groom as their wedding day approaches? T

here’s been a lot of talk online among fans about when Ben and Ciara are going to start a family, which could happen pretty much anytime.

“Cin” fans would certainly love to see Ciara and Ben wind up with a bun in the oven, or a “Cin Bun,” as fans are calling it. The storyline possibilities here are rich, given that Ben could face a crisis, perhaps wondering if he’ll be a good father after having had Clyde Weston (James Read) for a dad and experiencing so much turmoil growing up.

And then there’s going to be the return of Eve Donovan (Kassie DePaiva) at some point down the line, which could cause some interesting drama for Ben and Ciara.

As DOOL viewers know, Eve detests Ben for killing her daughter Paige Larson (True O’Brien), and she might have something to say about the justice in Ben having a child of his own after he took her daughter away.

Those are some pretty heavy storyline possibilities, but there’s another lighter one, and that’s that Ciara could find out that she’s pregnant before the wedding. Ciara could be a pregnant bride, with a “Cin Bun” on board. She could even surprise Ben with the news right before or right after the wedding, and it could be a fun time for the couple.

Of course, if Ciara is pregnant going into the wedding, that will be more news that she’ll have to break to Hope, Julie, Victor Kiriakis (John Aniston), and other members of her family. But we suspect that pretty much everyone would be thrilled for Ciara and Ben, and that the news would just add to their happy day.

Do you think that Ciara will find out that she’s pregnant before her wedding to Ben? Stay tuned to DOOL and be sure to keep CDL bookmarked for all your soap updates. We’ve got the latest DOOL news and spoilers just for you!