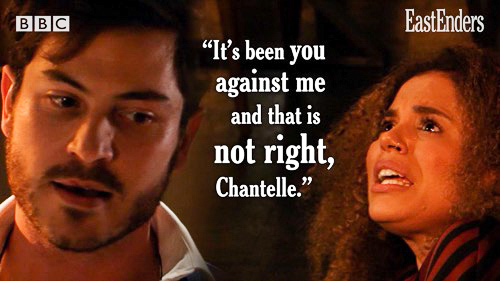 Eastenders spoilers reveal Chantelle Atkins (Jessica Plummer) received the worst beating than ever before. Gray Atkins (Toby-Alexander Smith) beat his wife to a bloody pulp. The final scene was of her crumpled on the floor in agony. Will she survive? We won’t find out until Monday because BBC cancelled Friday’s airing. Plus, Plummer has joined the #spEEKout domestic violence campaign.

Gray Atkins Brutally Beats Wife – Mitchell “Mitch” Baker (Roger Griffiths) is poking around in Gray’s personal business and it has led to devastating consequences. Now, Mitch is just concerned, especially after learning that Gray is no longer at the law firm.

However, Gray assumed that Chantelle betrayed him by telling others about his work situation. Of course, that isn’t the case, but it didn’t stop Gray from viciously beating his wife until she was battered and broken on the floor. She has been beaten so bad that she can’t even stand up.

Eastenders Spoilers: Abuser Called a ‘Hero’ – Like many abusers, they show a very different version of themselves to the public. This is the case for Gray as well. In fact, he goes to The Vic and everyone calls him a “hero” for helping Whitney Dean (Shona McGarty) as she battles criminal charges. As viewers know, she is behind bars for defending herself from Leo King (formerly Tom Wells), who relentlessly stalked and terrorized her.

Eastenders Spoilers: Gray’s Discovery Could Help Him Win Whitney’s Case – But There Might Be a Catch https://t.co/tlPAYLTdhE

Will Chantelle Atkins Survive? – Eastenders spoilers reveal that some fans are concerned that Chantelle might not survive her injuries. However, there is no word on Plummer leaving the soap. She isn’t able to stand up and is severely injured. However, she is still breathing and there is an indication that she will survive this heinous assault. But will this give her the motivation to escape with the children? She might not live through the next attack.

Did BBC Cancel Eastenders? – There was one report that BBC canceled the British soap after Chantelle’s brutal beating aired on television. However, that’s not exactly accurate. The network replaced Friday’s episode, so we won’t see if Chantelle survives until Monday.

The past few months have been a hard watch for me. But I am a survivor and others can be too. Thank you for showing awareness. #spEEkout pic.twitter.com/Zt3iHHgfTx

Jessica Plummer Joins Domestic Violence Campaign – Earlier this week, the official Instagram account for Eastenders promoted the domestic violence campaign, #spEEkout. Plummer was photographed with the hashtag on her hand. Followers were asked to join Eastenders and Plummer in spreading awareness and supporting domestic violence survivors.

“Show your support for survivors of domestic abuse. Please share your #spEEkout picture with us at #EastEnders. Stand with Chantelle… Details of organizations offering information and support are available at bbc.co.uk/actionline.”

This campaign comes around the same time that Camilla Parker-Bowles, Duchess of Cornwall launched her own family violence campaign, #EveryonesProblem.

Do you think Chantelle will survive Gray’s brutal attack? Will, she finally leave her abusive husband or will she be frozen with fear?