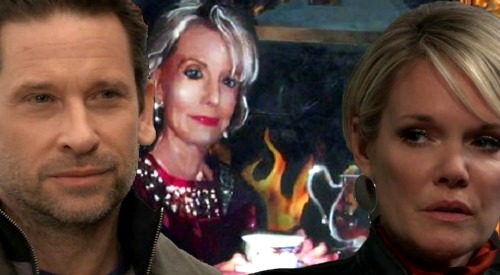 General Hospital (GH) spoilers tease that Franco Baldwin (Roger Howarth) will become protective of Ava Jerome (Maura West). After a run-in with Nikolas Cassadine (Marcus Coloma), Franco will be left feeling agitated and concerned. He’ll probably have a bad feeling about Ava’s marriage to Nik and what that’ll mean for her moving forward.

Franco has made his fair share of mistakes, but that doesn’t mean Nik shouldn’t be held accountable for his own. General Hospital spoilers say Franco will seek out Ava after this faceoff.

The tense vibe will leave Franco wondering if Ava’s really OK with this marriage. They’ll talk about what Ava hopes to gain, but Franco may not be sure Ava knows what she’s signing up for.

Nevertheless, Ava will promise Franco that she’s in control. She won’t be worried and will actually have a special request for Franco – one that could cement her place at Wyndemere.

After Franco accepts Ava’s decision to stick with Nikolas, he’ll agree to paint her. Franco will plan to get started on this portrait soon, but alarm bells will go off for Elizabeth Baldwin (Rebecca Herbst).

Liz will get updates on Ava’s request and fear that Franco’s friend has some sort of of typically evil and manipulative agenda. There are always a few tricks in store when it comes to Ava!

However, Franco isn’t exactly a popular guy around town, you know that old serial killer stigma makes it tough. He doesn’t have a ton of pals, so he’ll want to do this favor for Ava and show his support.

GH spoilers say Liz will go along with the idea, but she’ll remain uneasy. She won’t trust Nikolas since he forced Hayden Barnes (Rebecca Budig) into hiding, but she certainly won’t trust Ava either. Liz will just think this is a bad situation all around.

General Hospital spoilers say Liz’s worries are warranted! February sweeps will bring some “Friz” drama and it seems it’s all because of Nik’s marriage to Ava. The newlyweds will make trouble for Franco and Liz, so GH fans won’t want to miss what’s in store. We’ll keep you posted as other news comes in. Stay tuned to the ABC soap and don’t forget to check CDL often for the latest General Hospital spoilers, updates and news.