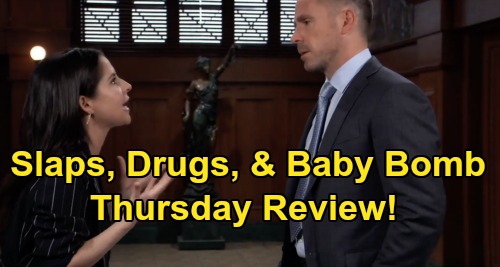 General Hospital (GH) spoilers review for the final new episode, Thursday, May 21, reveal that Maxie Jones (Kirsten Storms) looked at the photo shoot pictures of Sasha Gilmore (Sofia Mattsson) at Deception. Peter August (Wes Ramsey) and Valentin Cassadine (James Patrick Stuart) were on hand to admire the photos as well. Valentin chimed in about something, and Maxie quipped that she thought Valentin was a just a silent partner.

Valentin said that he was just at Deception to check on things, but that he had other ventures to deal with. Valentin suggested that Deception plan its launch party around the Nurses’ Ball, which Maxie loved.

Maxie turned back to the photos and told Sasha that whatever she did to get her head back in the game worked. Maxie then stood up and felt a bit light-headed, so she and Peter left to get lunch.

Valentin asked Sasha if she was ok, since he had heard about Michael Corinthos (Chad Duell) and Willow Corinthos’ (Katelyn MacMullen) wedding. Sasha assured Valentin that it wouldn’t affect her work, and they talked for a moment about how Sasha is a good person, and about how Sasha couldn’t bring herself to dislike Valentin.

Valentin predicted that Deception would be a major success, and that Sasha would wind up a wealthy woman. “Too bad money can’t buy happiness,” Sasha said. After Valentin left, Maxie’s assistant Suzanne came up and gave Sasha another vial of powder “for next time.”

Sasha protested, saying that today was just a one-time thing. “Keep it, you never know when you might need another boost,” Suzanne said.

At the Metro Court, Laura Collins (Genie Francis) disconnected from a call about the GH lawsuit, then she joined Robert Scorpio (Tristan Rogers) at the bar. Robert shared that he believed that Holly Sutton (Emma Samms) was alive, and Laura wondered if Robert had anything other than his gut feeling to go on.

Robert said he could use Luke Spencer’s (Anthony Geary) number, and Laura told him to go through Tracy Quartermaine (Jane Elliot). Meanwhile, at a table, Maxie couldn’t face her salad, and Peter noted that she had barely eaten any of it.

Maxie said that she wasn’t hungry, and Peter suggested she see a doctor. Peter stepped away, and Maxie consulted the calendar on her phone, then told Peter when he returned that maybe he was right, and she should see a doctor.

At the Quartermaine mansion, Ned Quartermaine (Wally Kurth) talked with Tracy via phone, and he got updates about someone being after Dylan Quartermaine (Robert Palmer Watkins) ELQ shares.

Olivia and Brook Lynn fiercely argued, then Olivia blurted out that she was on the phone with her psychic…just as Ned walked in. Ned was sympathetic, realizing that Olivia just wanted some comfort about Dante Falconeri (Dominick Zamprogna), and he apologized for being so busy trying to find out who’s buying up ELQ shares for a hostile takeover.

Brook Lynn didn’t like the sound of that, and she immediately took off and left a voice message for Linc Brown (Dan Buran).

Ned and Olivia talked privately, and Olivia explained that Rocco Falconeri (O’Neill Monahan) had taken Dustin Phillips (Mark Lawson) to “take your dad to school” day. Olivia lamented about how Dante was being erased.

Ned cautioned Olivia against her psychic taking advantage of her pain. The doorbell rang, and it was Robert, who wanted Luke’s phone number. Ned went off to call Tracy to get it.

Olivia and Robert talked about Holly’s alleged death and about Dante, and Robert managed to know the right thing to say, and he didn’t think that Olivia’s decision to seek out a psychic was silly. Olivia and Robert’s hands were touching when Ned returned with Luke’s number, which irked Ned.

Back at the Metro Court, Laura spoke briefly with Valentin, who said that he had no intention of attending Nikolas Cassadine (Marcus Coloma) and Ava Cassadine’s (Maura West) portrait unveiling party. Valentin left, then Laura called Anna Devane (Finola Hughes) to say that she was worried about Robert.

In another area of the restaurant, Brook Lynn met with Linc, and she demanded to know who the third party was who got her ELQ shares. Linc put her off, saying that it was not her business, and Brook Lynn threatened to expose his sexual harassment of her if he didn’t cough up a name.

Over at Crimson, Jasper “Jax” Jacks (Ingo Rademacher) popped in to see Nina Reeves (Cynthia Watros) ahead of the custody hearing. Nina didn’t know what to do, and she lamented that if she didn’t stand up for Nelle Jerome (Chloe Lanier), then who would?

Jax cautioned Nina that she might feel responsible if Nelle gets custody of Wiley Quartermaine Corinthos (Erik and Theo Olson) and then something goes wrong.

Nina argued that if she turns her back on Nelle and she loses Wiley, then Nelle has virtually no chance of turning her life around. Suddenly, an alert on Nina’s phone went off – it was time to go to the custody hearing.

In the courtroom, Nelle got sworn in as a witness for her direct testimony. Martin Grey (Michael E. Knight) immediately started making inflammatory statements against Michael, and Diane Miller (Carolyn Hennesy) objected, making a crack about Martin’s “southern fried charm.”

Nelle finally spoke, telling the court about how she felt when she found out that her baby was actually alive.

Nelle blamed Brad Cooper (Parry Shen) for orchestrating the baby switch, and she was talking about that when Sam McCall (Kelly Monaco) walked in and glared at Julian Jerome (William deVry).

Nelle went on, talking about her new husband Julian and how Wiley brought them closer together. Martin asked Nelle why she thought she deserved sole custody, and Nelle bashed Michael to being entitled and selfish.

Diane cross-examined Nelle, bringing up Nelle’s attempt to run off with Wiley and her assault of Willow. Martin tried to object with bravado, but Diane managed to get Nelle’s misdeeds out there.

Martin then called Julian to the stand, much to Julian’s surprise. Sam glared at Julian as he got sworn in. Julian testified about loving Wiley and marrying Nelle to create a stable home for him.

Martin asked Julian about his jail sentence, and about him being reformed, which Julian got through calmly. Diane then cross-examined Julian, bringing up all the various charges against him over the years, as well as his knife-wielding incident with Alexis Davis (Nancy Lee Grahn) and his sister Olivia Jerome’s (Tonja Walker) attempt to blow up GH.

Inexplicably, Martin did not object to any of this.

The court recessed, and Sam and Julian talked in the foyer. Sam was furious with Julian, slapping him in the face and telling him that he was dead to her and Lucas Jones (Ryan Carnes).

Sam revealed that she had told Lucas about Julian’s marriage to Nelle, and that he wanted nothing more to do with Julian. Sam was furious, and she stormed off, leaving Julian miserable.

Court resumed, and Martin called his next witness…Nina. Nina and Jax walked into court, and Carly Corinthos (Laura Wright) was horrified. Jax looked really uncomfortable as Nina walked up to the witness stand.

Jax sat down next to Carly, who asked her what Nina was doing. “I have no idea,” said Jax. Nina got sworn in, saying she’ll tell the truth so help her God.

That was a terrific episode of GH! We’ll be sure to give you updates as more GH news comes in. Stick with the ABC soap and remember to keep CDL bookmarked for the latest General Hospital spoilers, daily recaps, and news.

WATCH: Julian’s testimony doesn’t sit well with Sam… not at all. #GH pic.twitter.com/uUBz7jgcaB