General Hospital Spoilers: Is Brando Corbin an Undercover Cop – Dev’s Father Back from the Dead, Determined to Take Down Sonny? 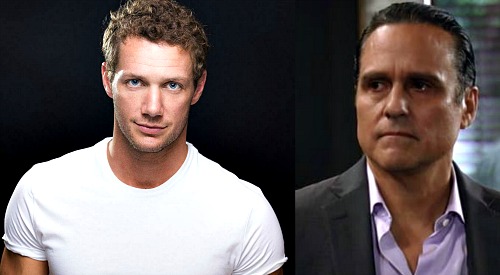 General Hospital (GH) spoilers tease that a shocker will strike for the Corinthos clan. Gladys Corbin (Bonnie Burroughs) claimed her son died years ago, but a twist will change game in an upcoming episode. Brando Corbin (Johnny Wactor) will turn up alive and well outside Sonny Corinthos’ (Maurice Benard) warehouse, so there must be a stunning story behind his return from the “dead.”

Is there more to Brando than meets that eye? Is Brando another undercover cop trying to take Sonny down? General Hospital spoilers say Brando’s resurfacing will bring a mystery and some major GH drama!

Why Was Brando’s Death Faked?

Usually when someone fakes his or her death, that person is in trouble or undercover. Gladys has given no indication of either, so what’s up with Brando? There must be a reason Gladys claimed her son was dead.

If Gladys has known all along that Brando’s alive, that complicates things even further. Why would Gladys agree to Sonny’s plot, which involves pretending Dev Cerci aka “Dev Corbin” (Ashton Arbab) is Brando’s son?

Gladys said she’s kept Brando’s phone active since his death to hear his voice. It seems she may have been talking to Brando himself instead! Are Brando and Gladys working against Sonny? Could Gladys be trying to gather information to help take down Sonny? Gladys has been awfully nosy lately, so that’s certainly a possibility to consider.

It is obvious that Brando isn’t another mobster or else he wouldn’t have saved Carly Corinthos’ (Laura Wright) life. If Brando was after Sonny’s territory, he wouldn’t think twice about taking Sonny’s wife out. Mobsters have no honor code when it comes to the loved ones of other mobsters. Brando isn’t out to kill Sonny’s family, so there has to be another explanation.

Does Brando Want a Job?

Dante Falconeri (Dominic Zamprogna) pulled a similar stunt when he first came to town. General Hospital fans will recall that Dante worked for Anthony Zacchara (Bruce Weitz) before infiltrating Sonny’s organization. Is Brando attempting to do the same thing and destroy the mobster that no one else has been able destroy?

Of course, if that’s Brando’s plan, he’ll inevitably fail like others before him. Brando might be a relative, but that gives Sonny no reason to be loyal to him. Sonny doesn’t even know Brando. The only thing Brando has going for him right now is saving Carly’s life.

Is Brando Associated with Taggert?

Marcus Taggert (Real Andrews) just returned to Port Charles at Jordan Ashford’s (Briana Nicole Henry) request. The timing’s a bit suspicious since Brando will appear so soon after. It’s not a stretch to think that Taggert and Brando could be working together.

Taggert has been after Sonny for years and has never been able to take him down. Does Taggert trust Brando to do what he couldn’t? If Brando’s an undercover cop with a plot against Sonny, he’d better watch his back!