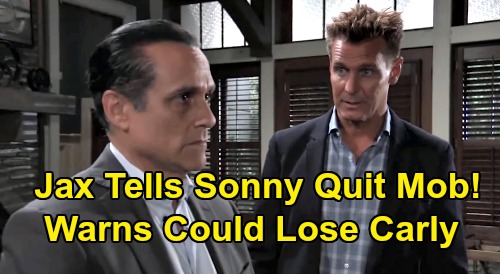 General Hospital (GH) spoilers tease that Jasper “Jax” Jacks (Ingo Rademacher) will wonder what the last straw will be. He’ll hope someone will be pushed to his or her breaking point. This may tie in with Sonny Corinthos’ (Maurice Benard) mob war, which recently put Josslyn Jacks (Eden McCoy) in grave danger. Will he ask himself when Carly Corinthos (Laura Wright) will say enough is enough?

Jax has been playing catch-up since his days of trying to win Brenda Barrett (Vanessa Marcil) from Sonny Corinthos (Maurice Benard). Carly and Josslyn were caught in shootouts that Sonny wasn’t to blame for – at least not directly. He had no idea the attacks were going to take place and even came under attack himself.

Sonny was just trying to get Mike Corbin (Max Gail) into a study that could help him. He certainly never wanted Mike or the rest of his family under fire. However, Jax won’t see it that way. There’ll be no convincing Jax that Sonny wasn’t responsible, so GH fans can expect a massive outburst.

To be fair, Sonny’s lifestyle in general is dangerous – and that may be where this “last straw” idea comes in. As far as Jax is concerned, the line needs to be drawn. Jax won’t like the fact that his daughter was at risk. He won’t think it’s fair for Sonny to put Carly and his other children in that kind of peril either.

General Hospital spoilers say Jax will start barking demands in an upcoming episode. He’ll insist that Sonny needs to walk away from this life of crime for the sake of his loved ones.

Jax will wonder what it’s going to take for Sonny to make changes. He’ll do his best to appeal to Sonny’s softer side by bringing up Mike. Jax will argue that Sonny’s endangering his family and wasting precious time with his father.

Sonny obviously isn’t going to walk away from the mob like Jax wants. He’ll plan to fight his enemy, Cyrus Renault (Jeff Kober), with everything he’s got. Sonny should make that clear to Jax, but will he get a warning in return?

Jax may contend that Sonny could lose Carly if the cost of being together gets too high.

"That greedy little opportunist has gone too far!" pic.twitter.com/Tch9dQSpTU