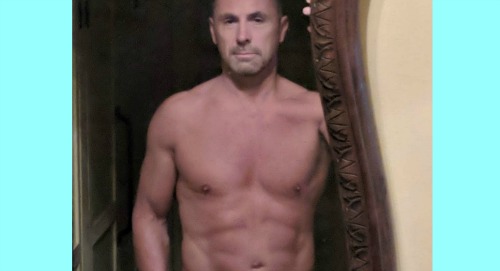 General Hospital (GH) spoilers tease that things are about to get steamy for one Port Charles resident! On Instagram, William deVry (Julian Jerome) put up a shirtless pic and showed off his buff bod. He admitted he’d been hitting the gym a bit more – and there’s a good reason why.

It turns out deVry filmed not one, but two love scenes in one week! “Guys. Can I just say sometimes working out sucks!!!” deVry insisted. “This week has been rough. As I like to say motivation is fleeting. Inspiration can last a lifetime. What’s your inspiration?! Oh and I had to workout. Two love scenes in one week at GH. Rough life I know. Someone has to do it right!!”

A couple of hot hookups are indeed headed Julian’s way, but we all know it takes two to tango. Who’ll be the lovely lady in bed with Julian – or could there be more than one? It’s certainly possible Julian will hook up with two different women.

Then again, maybe the first round of lovemaking will really rock Julian’s world. He may not be able to resist going for round two with the same sizzling woman as before.

Naturally, the first option that comes to mind is Brook Lynn Quartermaine (Amanda Setton). When Setton first debuted, Julian was the first character Brook Lynn interacted with. The spark was there from the get-go.

Since then, Brook Lynn has gotten to know Julian a bit better. She’s intrigued and impressed by his emotional complexity, so they’re well on their way to being in hookup territory. Not to mention both of them are stressed to the max right now.

Brook Lynn’s been dealing with all this sleazy music producer drama as well as Nelle Benson Archer’s (Chloe Lanier) presence on the Quartermaine property. Things should get worse for Brook Lynn before they get better.

As for Julian, he’s pleased Lucas Jones (Ryan Carnes) is awake, but he also knows that presents the potential for disaster. Lucas could still remember what Brad Cooper (Parry Shen) confessed before the crash.

Brad hasn’t been all that concerned about Lucas remembering, which worries Julian even more. He realizes they have to stay vigilant when it comes to protecting this secret. They can’t let their guards down and risk baby swap exposure.

Since both Brook Lynn and Julian have so much on their plates, it’s reasonable to think they’d want some sense of release. They could do that by hooking up repeatedly. Once passion explodes between them, Julian and Brook Lynn may have trouble resisting it.

General Hospital spoilers have already been pointing to a surprising bedroom buddy for Julian. His attraction to Brook Lynn would surprise him. It’s safe to say it’ll surprise Ned Quartemaine (Wally Kurth) as well if this shocker gets out!

Guys. Can I just say sometimes working out sucks!!! This week has been rough. As I like to say motivation is fleeting. Inspiration can last a lifetime. What’s your inspiration?! Oh and I had to workout. Two love scenes in one week at GH. Rough life I know😉. Someone has to do it right!!