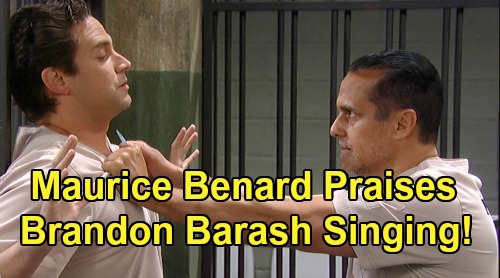 General Hospital (GH) spoilers reveal that one ABC soap actor recently had some high praise for a former costar who’s moved to Days of Our Lives. GH fans know Maurice Benard as Sonny Corithos in Port Charles. He’s always at the center of the drama, which is about to heat up thanks to some shocking shootouts.

GH viewers will also recall Brandon Barash’s exciting run as Johnny Zacchara. Barash eventually scored the recast role of Stefan DiMera on Days of Our Lives. Although Stefan was killed off, he’ll return to DOOL in a soapy twist this spring.

In the meantime, Barash is throwing his energy into an event for a good cause. He’ll be joining Eric Martsolf (Brady Black on Days) in Montreal on February 8 – and any proceeds raised will go toward fighting cancer as well as raising awareness.

This special event will include a Q&A session, dinner, dancing and karaoke. It’s the karaoke part that Barash gave a little preview of in a recent Twitter video. Barash played the guitar and sang a song, so many fans gushed over how well he could carry a tune.

It turns out Maurice Benard is a fan, too! He gave his former costar a shoutout after watching and listening to the clip. “Great voice Brandon,” Benard tweeted. That led to Barash’s grateful reply. “Thx Mo,” Barash said. “Hope you’re well, brother.” Aww! It’s always nice to see soap stars supporting each other and staying in touch.

If you’re missing Johnny on GH, you can catch Brandon Barash as Stefan on Days of Our Lives down the road. It’s not quite the same, but at least you’ll get to see Barash’s handsome face!

As for what’s ahead in Port Charles, General Hospital spoilers say Sonny Corinthos (Maurice Benard) will tackle his problems head-on – and he’s certainly got a lot of them.

Michael Corinthos (Chad Duell) will fight alongside his father, but he’ll also have major Nelle Benson Archer (Chloe Lanier) drama to contend with. Nelle will make it her mission to infuriate the Quartermaine family, so she’ll undoubtedly succeed in driving them all up the wall.